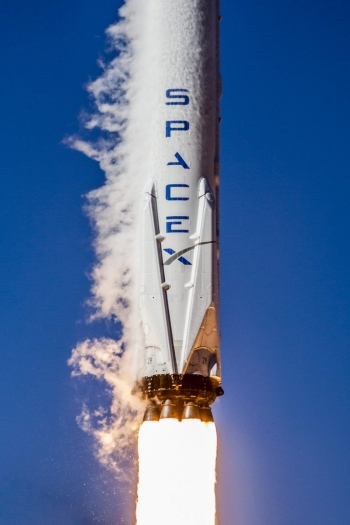 Satellite communications provider Iridium has announced that all five NEXT satellites for its sixth launch are in processing at SpaceX’s west coast launch site, the Vandenberg Air Force Base in California.

Iridium says launch will increase the total number of Iridium NEXT satellites in space to 55 and is the third Iridium launch to use a “flight-proven” SpaceX Falcon 9 rocket.

Iridium NEXT is the company’s $3 billion next-generation mobile, global satellite network scheduled for completion in 2018 and will replace the company’s existing global constellation in what is described as one of the largest technology upgrades ever completed in space.

Currently scheduled for launch on 19 May at 1:04:24 pm PDT (20:04:24 UTC), the Iridium NEXT satellites will be sharing the Falcon 9 with the twin spacecraft for the NASA/German Research Centre for Geosciences Gravity Recovery and Climate Experiment Follow-On mission.

Each Iridium NEXT satellite at the launch site has begun a number of pre-launch processing steps, including mating them to the dispenser, fuelling, stacking the Iridium NEXT and GRACE-FO dispensers on the Falcon 9 payload adapter, and encapsulation within the fairing.

Iridium says once launched, the rocket will first deploy the twin GRACE-FO spacecraft, after which the second stage will continue onward and deploy the five Iridium NEXT satellites.

The operational Iridium constellation is comprised of 66 satellites divided into six polar orbiting planes with 11 satellites in each plane.

Iridium says all five satellites for this launch will be deployed to orbital plane six.

To date, five Iridium NEXT launches carrying 10 satellites each have been completed, and over half of the Iridium NEXT constellation has been activated.

Iridium has contracted with SpaceX to deliver 75 Iridium NEXT satellites to orbit, 66 operational and nine on-orbit spares, through a series of eight launches.

Iridium says the NEXT satellites represents the evolution of critical communications infrastructure that governments and organisations worldwide rely upon to drive business, enable connectivity, empower disaster relief efforts and more.

More in this category: « Kleos Space opens APAC office in Australia Parkes telescope gets ‘bionic ear’ into sounds of the cosmos »
Share News tips for the iTWire Journalists? Your tip will be anonymous