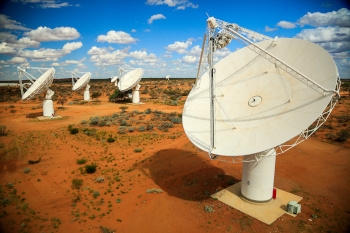 Three of the world's big optical telescopes — Keck in Hawaii, Gemini South and the European Southern Observatory’s Very Large Telescope, both in Chile — then imaged the galaxy from which the burst originated.

The results were published online by the journal Science on Friday.

“This is the big breakthrough that the field has been waiting for since astronomers discovered fast radio bursts in 2007,” CSIRO lead author Dr Keith Bannister said in a statement on Friday.

Since 2007, a global hunt has found 85 such bursts, most of them "one-offs". A small number are "repeaters" in the same location.

Two years ago, astronomers were able to discover a repeater’s home galaxy but they have found it much more difficult to localise a one-off burst as these last less than a millisecond.

Dr Bannister’s team developed new technology to freeze and save ASKAP data less than a second after a burst arrives at the telescope and used it to pinpoint the location of Fast Radio Burst (FRB) 180924 to its home galaxy (DES J214425.25−405400.81). The team created a high-resolution map showing that the burst originated on the outskirts of a Milky Way-sized galaxy about 3.6 billion light years away.

[DES stands for Dark Energy Survey, a big, recent catalogue of galaxies. Most galaxies don't get a special name - apart from the nearest/best-known ones, they tend to have names based on their position in the sky and the survey(s) that they are catalogued in.]

"If we were to stand on the Moon and look down at the Earth with this precision, we would be able to tell not only which city the burst came from, but which postcode – and even which city block,” Dr Bannister said.

Since ASKAP has multiple dish antennas, the burst had to travel a different distance to each dish.

The home galaxy was imaged using the European Southern Observatory’s 8-m Very Large Telescope. Its distance was measured with the 10-m Keck telescope and the 8-m Gemini South telescope.

“From these tiny time differences – just a fraction of a billionth of a second – we identified the burst’s home galaxy and even its exact starting point, 13,000 light-years out from the galaxy’s centre in the galactic suburbs,” Dr Adam Deller of Swinburne University of Technology, a member of the project, said.

The only previously localised FRB, the "repeater", has been identified as coming from a very tiny galaxy forming lots of stars. 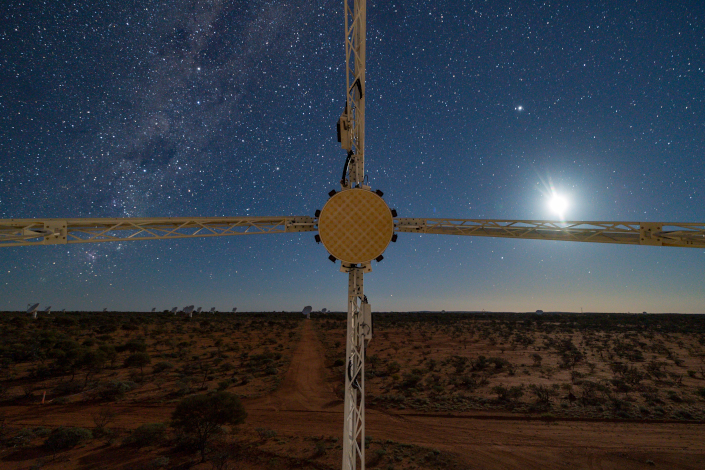 A view from the CSIRO’s Australian SKA Pathfinder radio telescope antenna 29, with the phased array feed receiver in the centre, Southern Cross on the left and the Moon on the right. Courtesy: CSIRO/Alex Cherney

“The burst we localised and its host galaxy look nothing like the ‘repeater’ and its host,” Dr Deller said. “It comes from a massive galaxy that is forming relatively few stars. This suggests that FRBs can be produced in a variety of environments, or that the seemingly one-off bursts detected so far by ASKAP are generated by a different mechanism to the repeater.”

What causes FRBs is not known, but finding their exact location will be a big leap towards discovering their cause.

Another team member, Dr Jean-Pierre Macquart of Curtin University node of the International Centre for Radio Astronomy Research, an expert on using FRBs to study the Universe, said: "These bursts are altered by the matter they encounter in space. Now we can pinpoint where they come from, we can use them to measure the amount of matter in intergalactic space.”

This would reveal material that astronomers have struggled to locate for decades.

The localisation of the radio burst was done as part of a project using ASKAP called CRAFT (Commensal Real-time ASKAP Fast Transients) that is jointly led by Dr Bannister, Dr Macquart and Dr Ryan Shannon of Swinburne University of Technology.

ASKAP is located at CSIRO’s Murchison Radio-astronomy Observatory and is a precursor to the future Square Kilometre Array telescope.