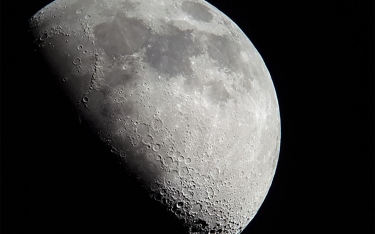 New Curtin University research has found the Moon may have been subjected to much greater impacts from asteroids and other bodies than previously thought, building on our understanding of the Moon’s earliest geologic evolution.

Published in Nature Communications, Curtin Research says the research provides a greater insight of how the oldest impact events on the Moon may have left near-invisible cratering imprints, offering a unique perspective about the evolution of the Earth-Moon system.

Lead researcher Associate Professor Katarina Miljkovic, from Curtin’s School of Earth and Planetary Science and the Space Science and Technology Centre, said the craters on the Moon may have looked significantly different if they occurred while the Moon was still cooling, following its formation.

“These large impact craters, often referred to as impact basins, formed during the lunar magma ocean solidification more than four billion years ago, should have produced different looking craters, in comparison to those formed later in geologic history,” Associate Professor Miljkovic said.

“A very young Moon had formed with a global magma ocean that cooled over millions of years, to form the Moon we see today. So when asteroids and other bodies hit a softer surface, it wouldn’t have left such severe imprints, meaning there would be little geologic or geophysical evidence that impact had occurred.

“The timeframe for the solidification of the lunar magma ocean varies significantly between different studies, but it could have been prolonged enough to experience some of the large impact bombardment history typical for the earliest periods of the solar system evolution.

“As the moon ages and the surface cools, it becomes harder, and the bombardment imprints are a lot more noticeable by remote sensing.”

Associate Professor Miljkovic said it remained imperative to understand the bombardment and the cratering record from the earliest epochs of solar system history in order to complete the story of how planets formed and evolved, by comparing different perspectives of asteroid dynamics and lunar evolution modelling,

Associate Professor Miljkovic said her research suggested the Moon may be missing evidence of its earliest crating record.

“In this research, we set out to explain the discrepancy between theory and observations of the lunar crating record,” Associate Professor Miljkovic said.

“Translating this finding will help future research understand the impact that the early Earth could have experienced and how it would have affected our planet’s evolution.”