Vodafone Australia paid no tax in 2014 – Why? Featured 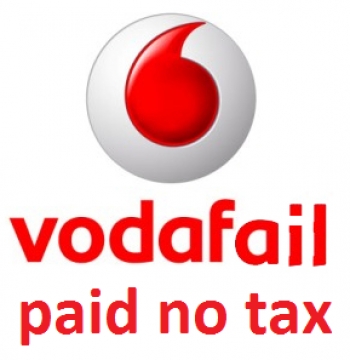 Could it have been ‘Vodafail’ as customers deserted the less than stellar performing mobile carrier back in 2014. Whatever the reason a huge number of Australians want to know why the multinational mobile operator paid no tax in Australia – and they want to know now.

iTWire has reproduced - as a public service - the following information from the ‘SumOfUs’ - a self-touted 'global movement of consumers, workers and shareholders speaking with one voice to counterbalance the growing power of large corporations'. It takes no responsibility for the veracity of the claim except that Vodafone is listed on a dataset from the ABC showing Vodafone Hutchinson Australia had a total income of A$3,567,085,248 and paid no tax.

Vodafone has since responded with a explanation here and points out that, "Most importantly, it needs to be understood that the ATO’s report relates to company income tax (also known as corporate tax). Company income tax is just one form of tax and is based on profits, not revenue. In 2013 (and 2014), Vodafone made a loss, meaning our taxable income was $0. We take our tax obligations very seriously and paid all taxes (eg payroll tax) which were due."

Over 17,000 Australian members of the SumOfUs community have called on Vodafone to release a statement telling us why it paid no tax in Australia in 2014, according to our tax office.

But the telecom giant is giving us wishy-washy responses, and it is time to take the next step in the fight for economic justice.

Vodafone cares about its public image. It’s got a huge social media presence. It responds to customer enquiries on its Facebook and Twitter page at the drop of a hat.

This gives us a key opportunity to publicly shame the telecom giant into responding to our demands.

Please, can you take two minutes to ask Vodafone why it paid no tax in 2014?

Here are some talking points to get you started:

If you don't use social media, feel free to forward this email to your friends to show how together we're combatting multinational tax avoidance in Australia.

Corporations should not be able to get away with not paying tax. If there’s a legitimate reason as to why Vodafone isn’t paying tax, then we need to hear it now. Otherwise hardworking Australians like you and me end up subsidising these companies’ operations.

It’s a big issue to campaign on, but if we can get some wins, we could transform how our society works. If Vodafone paid its tax, this money could go to desperately starved public services. We could potentially stop the government’s cuts to health, education, and paid parental leave.

But we can’t do this if we don’t stand up to Vodafone together.

Join us. Post a message on Vodafone’s Facebook wall and demand why it has paid no tax now.

More in this category: « Hybrids the form factor of the future – tablets so yesterday University of WA launches Education Innovation Hub »
Share News tips for the iTWire Journalists? Your tip will be anonymous