The two things users will like about Windows 10 Featured 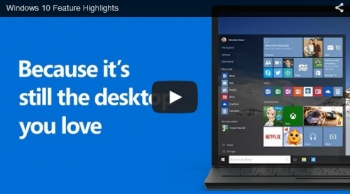 The start button/menu is back and the familiar, comforting desktop environment that runs millions of x86 programs is still very much a part of Windows.

Microsoft has listened. It has managed to meld the best of Windows desktop with touch control for enabled devices and wrapped it in something called Continuum - but more on that later.

At Microsoft //Build Sydney at Luna Park today Giorgio Sardo, Senior Director of Developer experiences delivered highlights of the //Build Developer conference held earlier in May in San Francisco. About 500 developers attended and many hung on every word, as Giogo delivered the new, softer Microsoft – is that a Microsofter – story. Microsoft’s vision is to empower every person to achieve more regardless of the device or operating system used. In fact, they demonstrated things on Windows, Android, iOS and OS X just to prove it.

No Microsoft has not given up on Windows – it truly believes that it will be the mainstay of the desktop and enable higher productivity for a very long time to come. Neither is it ceding ground to iOS and Android – it is now a viable choice on potentially the widest range of devices.

Windows 10 is the beginning of an operating system as a service – continually updated and up to date for the life of the device – and it will run on over 1 billion devices within two to three years. “A compelling reason for developers to work on Windows apps first,” Giorgio said. More on that later too.

The fact is that Windows has the same code regardless of whether it runs on an Internet of Things (IoT) device like the ARM based Raspberry Pie 2 (IoT includes ATMs, point of sale, elevators, vending machines and 20 billion other devices soon); Smartphones and phablets (called Windows Mobile); Tablets/Ultrabooks/desktops; Xbox; Surface Hub; and augmented reality Hololens.

Microsoft is on track to release Windows 10 in the US Summer (July 29 announced today). It has released information about its SKU (varieties of Windows). Windows Mobile will be next – it is a little more complex to bring to market due to telco carrier issues – all of which will be solved with this version and it will take over operating system updates. Xbox will be part of a monthly update where the kernel is changed from Windows 8 to Windows 10. Server products will be early next year.

It is still based on the venerable Windows NT core so x86 programs will still run as they always have. While the work on Windows 10 is the greatest ever undertaken (thousands of new features) it is more about unifying the Windows ecosystem and bringing other ecosystems into the fold to allow people to work on the device of choice using the services of choice. In part, this is due to the cloud that allows instant scalability and software as a service. What you were doing on a Windows device is easily picked up using an Android/iOS/OS X app without loss of things like formatting etc.

For example, Cortana – Microsoft’s digital voice assistant – can run on any device because of the cloud. Cortana is much more than voice activated search. iTWire has an interesting article on it here.

Much software (programs) will eventually move to Universal apps and Microsoft’s single store (a cloud) opening up world markets to Australian developers – and it handles all the e-commerce, distribution and update issues as well as promoting the product based on big and granular data that Microsoft has.

Windows Hello – that replaces the login and password – uses facial recognition or other gestures to get into Windows devices.

Continuum is exciting – the ability to run any Windows device with a mouse and keyboard or use touch if its enabled. For example, this means a new Windows smartphone can be used as a PC – that is interesting. It means a hybrid (tablet and detachable keyboard) automatically changes from keyboard to touch when the keyboard is detached. But more than that is the change in the way the same software is responsive to different screen sizes, hardware capabilities and input methods – all without user or developer intervention.

So the message is clear – if you use Windows XP or later then Windows 10 won’t bite!

//Build is for developers

It has been a long time since I first wrote code in Assembly language 01 00 01 … so I am not going to get technical. Windows 10 introduces thousands of new features that developers can use. Some are unique to Windows but most will translate to Android and iOS/OS X.

These include new application programming interfaces (API) that do things like ink drawing, map controls (and all that goes with location) and bridges to bring Android and iOS/OS X apps to Windows and vice versa. From the applause it is clear that many developers will no longer write first for iOS and Android.

In the games arena Windows 10 has DirectX 12 and all Windows devices will be able to play Xbox Live games. Virtual reality (VR) is also an API and expect to see Windows Mobile become a VR device just as Samsung has done with its premium phones.

The //Build Sydney event was a taste of what was presented earlier in the US. Alex Zaharov-Reutt covered that here and if you have time, you can access hours of content on Microsoft’s site (the link is in the article).

I admit to being a Microsoft watcher and a satisfied Windows user but I acknowledge the amazing work, features and business models of Apple and Google. I suspect that they will be working overtime to counter the Windows 10 effect – sucking the oxygen out of any Android and iOS story for some time to come.

Is Windows 10 better? Does it have better coverage – 1 billion devices? Does it have a superior developer environment? Is it Microsoft’s panacea? Does a bear s&*t in the woods?

I suspect that the answer will be yes to all. In any case, it is a free upgrade from licenced Windows 7 and above and that alone will guarantee success. Once users get used to Cortana, Bing, the extended Windows ecosystem and more then it stands a chance of decisively reclaiming the crown on all devices.

Competition is healthy I promise Apple and Google equal time and right of reply.

More in this category: « Ten must-have security apps for Android Avast now the world’s most popular consumer protection »
Share News tips for the iTWire Journalists? Your tip will be anonymous