Symantec and Microsoft assist to take down Trickbot Featured 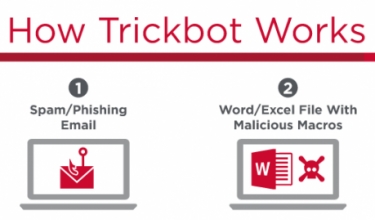 Recent reports identified the US Cyber Command as being responsible for the temporary neutering of Trickbot, but it seems other organisations assisted.

Posted just now, Symantec has announced that they were a major part of the interruption of the Trickbot malware regime.

According to Symantec (and echoed by other organisations), "Trickbot has been implicated in targeted ransomware attacks, where credentials stolen by the malware were used by the Ryuk ransomware operators to compromise victims' networks and encrypt all accessible computers."

Late last week reports started to emerge that Trickbot was being attacked by unknown adversaries who, amongst other responses, edited the management information on infected end-user computers to define the IP address of the command and control servers as 127.0.0.1. This of course meant that infected computers would look only to themselves for further commands.  Not the loudest of channels!

On Saturday, Brian Krebs reported that multiple sources identified the US Cyber Command as the primary initiator in this response. This was based on, amongst other things, a Washington Post story that suggested the Cyber Command was intent on disrupting threats to the upcoming US election.

Of course, disrupting the current activity of Trickbot and the (unknown) team behind it may-well stop new threats, but there is still a large cache of captured information from already afflicted systems. And threats of mass exposure.

In addition to the US Cyber Command and Symentec, Microsoft was also active in the take-down, being responsible for the legal action to attack the infrastructure of the botnet, although that was less prominent in the response than the dissection of management links. Microsoft also assisted in the analysis of tens of thousands of Trickbot malware in an attempt to understand it's abilities and potential weaknesses.

Multiple reports suggest that this was not a fatal blow, and that the bot-herders are already actively working to rebuild their herd - Krebs, for instance, reports that in addition to rebuilding connections, they are contemplating dramatically increasing the ransom penalty for afflicted organisations. However, nothing has been said as to the next steps of the authorities. One wonders how hard the next hammer-blow might be.

Perhaps (although highly illegal!) the 'good guys' might command the herd to instigate a DDoS against the C&C infrastructure!  No... perish the thought.

We commend the various resources linked in this short summary to those who wish for further information. This is an ongoing action and there is still much to play out.

"Physician heal thyself," as the bible tells us. Of course there's a modern-day equivalent that's probably more apt, but this is a family show and we don't plan to debase ourselves.

More in this category: « Check Point warns Amazon Prime Day shoppers to be vigilant Sophos expert says links between Trickbot and election security unlikely »
Share News tips for the iTWire Journalists? Your tip will be anonymous