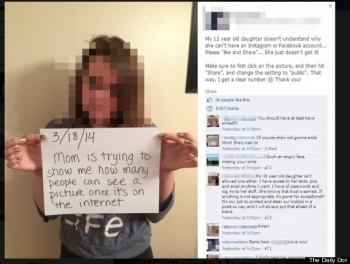 The tried and true method of naming and shaming is coming under fire after a US mother tried to teach her daughter why she couldn't have a Facebook or Instagram account, by publicly shaming her in a picture.

Kira Hudson from Colorado made her pose with a sign that read: "Mom is trying to show me how many people can see a picture once it's on the internet."

The picture was accompanied by these words from mom: "My 12-year-old daughter doesn't understand why she can't have an Instagram or Facebook account...Please 'like and Share'...She just doesn't get it!"

Within hours the image (below) had been shared 54,637 times, with lots of comments from the supportive to the outraged. 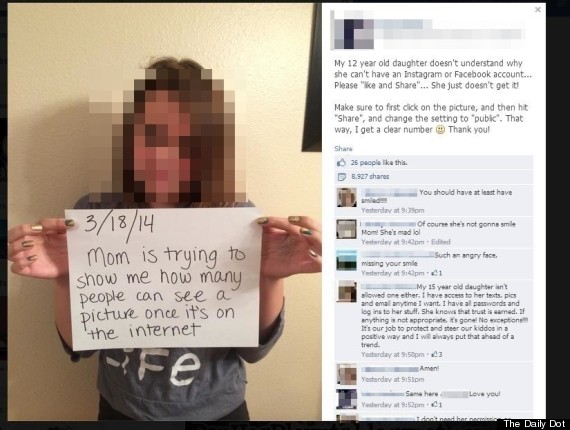 The story took a turn however when the image went viral and ended up on 4chan, an image-based bulletin board,.

Users on popular (and weird) message board 4chan found Hudson’s Facebook page, home address, and phone number, and decided to send hundreds of pizzas to the family and prank call them. The details were outdated however as the family had moved out recently, meaning the wrong family was receiving prank calls and pzzas.

A 4chan user also edited the photograph to include an alternate message that read, “Maybe you shouldn’t use your daughter as an experiment to prove your point. Just an idea.” 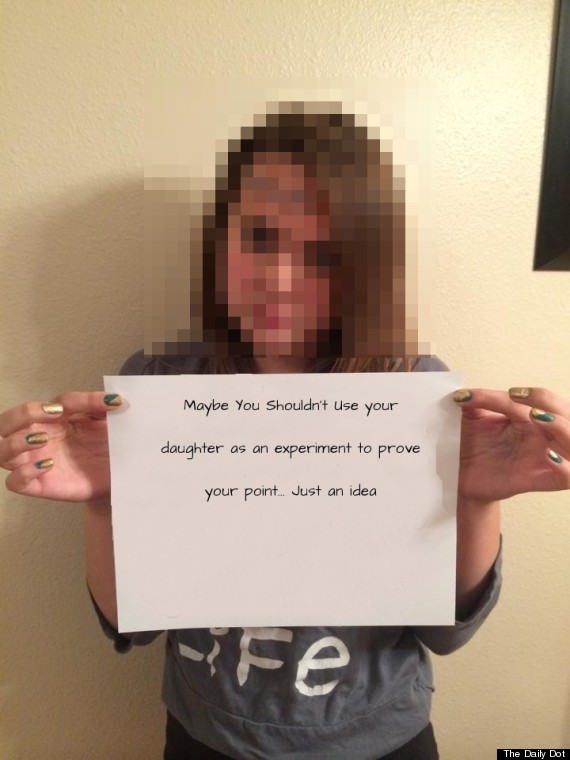 The image was eventually removed from Facebook by Hudson, after receiving almost 1 million likes.

In a statement to the Huffington Post, Hudson wrote:

“I am very grateful to all of the parents who have messaged my daughter and me, letting us know that because of our “experiment,” they were able to teach their own children more about Internet safety. This was one lesson that both my daughter and I learned very quickly! I had not anticipated it gaining momentum as fast as it did. It certainly opened my eyes to the fact that I thought my own private Facebook was secure. It was not as secure as I thought. Luckily for us, the information that was gathered by others was not my current residence or phone number.

I would like to apologize to the family who is living at our old address and let them know that I hope this hasn’t caused them much distress and the next pizza will be a gift from me. This whole thing has really proven the point, and I am hopeful that even though there have been a few bumps, others can continue to learn from our experience.”

Facebook has come under heavy fire recently for posting "questionable advertising" to teens on the site, including ads for guns and dating apps.

More in this category: « Digital wallets - you will need one soon Hesperbot banking trojan targeting Australia »
back to top