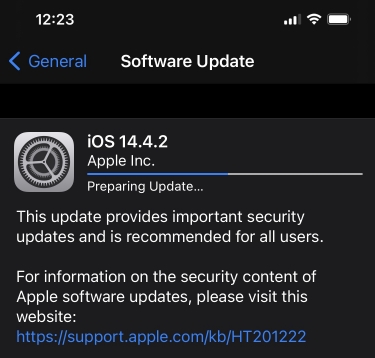 Although it has just been over three weeks since the last updates for the iPhone, iPad and Apple Watch, and in the last update, Apple TV's tvOS too, another update is out to defeat this vulnerability which "may have been actively exploited."

It's time to upgrade iOS, iPad and watchOS to their latest versions, which means iOS 14.4.2 on the iPhone 6s and later, and iPod touch 7th-gen, as well as iPadOS 14.4.2 for the iPad Pro (all models), iPad Air 2 and later, iPad 5th generation and later, and iPad mini 4 and later

watchOS 7.3.3 is also available for Apple Watch Series 3 and later.

iOS 12.5.2 is also available for the iPhone 5s, iPhone 6, iPhone 6 Plus, iPad Air, iPad mini 2, iPad mini 3, and iPod touch 6th-gen, to patch the same vulnerability, so it's good to see Apple continue supporting even those older devices with security updates, too.

On all these support iPhones, iPads and Apple Watches, go to settings, then general, then software update, and follow the instructions to update to the latest version.

The impact of the vulnerability, CVE-2021-1879, is "processing maliciously crafted web content may lead to universal cross site scripting."

Apple says it is "aware of a report that this issue may have been actively exploited," and that "this issue was addressed by improved management of object lifetimes."

There is no mention anywhere here of a tvOS 14.4.2, and I'm not home to check if tvOS also has an update, but there's no information about it online as yet.

Also I wonder if we'll see a BigSur macOS 11.2.4 update to fix this problem there too, should it also exist there, where it probably exists, too, although that hasn't been officially confirmed or denied, it's just my expectation, which could be wrong.

So, if Apple says it has had a report of a current vulnerability being actvely exploited, and Apple has released updates to close those vulnerabilities, it's a great idea to update as quickly as possible.

I'll update at least one of my iPhones to the iOS 15 beta when it launches to learn about it first hand, and then I usually update my personal iPhone to the beta once the public beta launches, or a beta update or two after that.

It also depends on the issues people are reporting at the time, but it is generally a fun thing to do if you can put up with the buggy process until the new OS launches, after which all the bugs that are still remaining will get fixed up the updates that follow, from the aforementioned 15.0.1 earlier and beyond.

So, if you have a compatible iPhone, iPad, iPod touch or Apple Watch, it's time to update - please do it asap so you stay protected!

More in this category: « Nine Entertainment confirms it suffered network attack Channel Nine morning show goes ahead a day after network attack »
Share News tips for the iTWire Journalists? Your tip will be anonymous