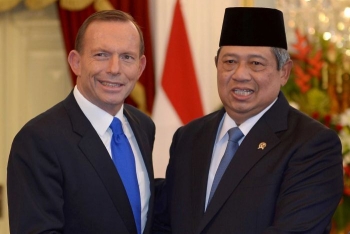 A hacker claiming to be an Indonesian member of the loose hacking collective Anonymous has claimed responbility for attacks on the AFP and Reserve Bank websites, which were down for a number of hours this morning.

The AFP and the Reserve Bank each separately confirmed to the ABC that their sites were attacked overnight, though both also said hacker did not gain access to any sensitive information.

The hack follows similar attacks earlier this month when Indonesian hackers attacked the website of the Australian Secret Intelligence Service (ASIS), taking it down for days through a DDoS attack.

The AFP website was down at around 10.30am AEDT but is now running again, and Commissioner Tony Negus says the agency is investigating the attack.

"We have had an attack on the open source website, not connected to secret networks, but there has been an attempt on our website this morning which is being dealt with," he told reporters.

"I am not sure who is the perpetrator but we are investigating that."

An AFP spokesperson had earlier told the ABC the agency takes any attack "very seriously" and warned hacking is a criminal activity, not "harmless fun".

The Reserve Bank has also confirmed its website was "the subject of a denial of service attack" about 2.00am.

"There has been no outage, but the bank's website may have been slow for some users," a spokesman said.

The hacks come amid bitter tensions between Australia and Indonesia, as documents leaked by whistleblower Edward Snowden revealed Australia spied on Indonesian President Susilo Bambang Yudhoyono and his wife in 2009.

The Indonesian President officially downgraded Australia’s diplomatic role with the country yesterday, saying that it is “turning off the tap by degrees” over the spying.