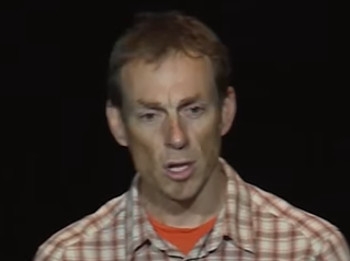 Disclosure of the Meltdown and Spectre vulnerabilities, which affect mainly Intel CPUs, was handled "in an incredibly bad way" by both Intel and Google, the leader of the OpenBSD project Theo de Raadt claims.

"Only Tier-1 companies received advance information, and that is not responsible disclosure – it is selective disclosure," De Raadt (below, right) told iTWire in response to queries. "Everyone below Tier-1 has just gotten screwed."

Details of the bugs were published on the Web on 3 January though there had been an understanding that disclosure would only take place on 9 January, that being the day when Microsoft is scheduled to release its monthly security updates.

The reason for this is because the bugs mainly affect Intel CPUs and Windows is the operating system that has the biggest share of such processors.

Google justified breaking the embargo, saying: "We are posting before an originally coordinated disclosure date of January 9, 2018 because of existing public reports and growing speculation in the press and security research community about the issue, which raises the risk of exploitation."

The reason why such bugs had come about was put down by De Raadt to Intel's desire to stay far ahead of the competition; hence it had played "fast and loose".

"There are papers about the risky side-effects of speculative loads – people knew, and as a result no other vendor's chips does speculative loads (Meltdown – Intel Only) in a significant way," said de Raadt who heads a project that has an enviable reputation in that it has had just two remotely exploitable bugs in its default install since it started in 1996.

"Intel engineers attended the same conferences as other company engineers, and read the same papers about performance enhancing strategies – so it is hard to believe they ignored the risky aspects. I bet they were instructed to ignore the risk," he said.

"It is a scandal, and I want repaired processors for free. I don't care if they are 30% slower, as long as they work to spec. Intel has been exceedingly clever to mix Meltdown (speculative loads) with a separate issue (Spectre). This is pulling the wool over the public's eyes."

De Raadt found an analogy with the Volkswagen emission issue. "Some VW executives probably wish a problem with their brake controller software has been discovered at the same time," he quipped.

OpenBSD has a good reputation for security and runs some of the public servers with the longest uptimes. De Raadt himself is obsessed with security, and has as his aim the provision of an operating system which has a secure default install.

Given that, his barely suppressed anger at the security snafus revealed last week was understandable. "I am terrified of where this leads. Intel architecture is already very inconsistent, complex, and difficult to deal with," he said.

"Suddenly the trickiest parts of a kernel need to do backflips to cope with problems deep in the micro-architecture. This tricky component of kernel software is now becoming more complicated than it was in the past. We are used to hardware hiding the complexity and providing a uniform safe view."

De Raadt said there would be a "big price to pay for the complexity of handling exposure to the micro-architecture down the road, mark my words".

"Decades old trap/fault software is being replaced by 10-20 operating systems, and there are going to be mistakes made."