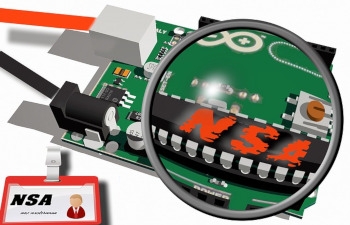 Former NSA contractor Harold Martin, who has been in jail for allegedly taking a massive horde of security material to his house, is set to plead guilty to the charges on Friday (Thursday US time).

But what would be more interesting about his plea is if he turns out to be connected to the Shadow Brokers, an individual or group that stole a number of exploits from the NSA and leaked them on the Web.

An article published in the US publication Politico in January drew connections between Martin and the Shadow Brokers, with a claim that researchers from Russian security firm Kaspersky Lab had tipped off the NSA that Martin could be worth investigating, after he allegedly sent Twitter messages to them.

Martin is said to have taken nearly 50 terabytes of data home over 20 years and was arrested in August 2016. The claims about his contacting Kaspersky Lab researchers were made after a court hearing in his case resulted in the release of redacted proceedings that mentioned some of the tweets in question.

The Politico article was the first time that there has been an attempt to link the Shadow Brokers to Russia through Martin. Prior to this, there was speculation that another arrested NSA employee, Nghia Hoang Pho, had unwittingly been the source for the Shadow Brokers.

Pho was taken into custody in 2015 after taking hacking tools home. He was sentenced to 5½ years in jail, followed by three years of supervised release, in September last year.

The NSA has been investigating the leak of its exploits for more than 2½ years.

More in this category: « Organisations not securing business applications, despite data losses: report Two-thirds of firms suffer certificate-related outages: study »
Share News tips for the iTWire Journalists? Your tip will be anonymous