Eclypsium demonstrates the remote bricking of a server 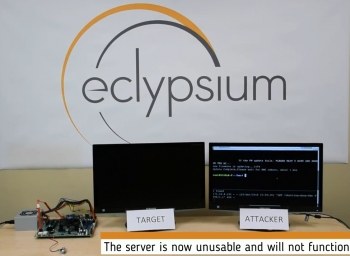 The implications of this are huge. Nearly any server in almost any data centre is vulnerable.

This can be done remotely, making the servers completely unfunctional and unrecoverable, and affects a majority of BMCs in the industry.

A (deliberately vague) video demonstrates the hack. This is a new class of attack – one that causes permanent damage to a system.

Eclypsium's representatives made the following points during a conversation with iTWire:

An Eclypsium representative said: "Let's explain what happens in the video. In order to manage assets at scale, servers include a baseboard management controller. You can think of this BMC as an independent computer that lives within a server.

"There are multiple ways of communicating with the BMC. Commonly, due to the nature of its role in remote management, we think about network-based methods like using the Web interface or the network capabilities of the Intelligent Platform Management Interface protocol where attacks have been published previously.

"However, there is also a host-based interface known as the Keyboard Controller Style, which is defined as part of the IPMI specification. Among other things, this creates a mechanism for firmware updates to be passed back and forth between the host and the BMC.

"In our demonstration, we use normal update tools to pass a malicious firmware image to the BMC over this interface. No special authentication or credentials are required for this.

"This malicious BMC firmware update contains additional code that, once triggered, will erase the UEFI system firmware and critical components of the BMC firmware itself.

"This could enable an incredibly damaging attack scenario. With something as simple as a malware infection or compromising an administrator, an administrator could irrecoverably brick the hardware of a data centre. Such an attack could also be easily scheduled to execute at a specific time.

"They can be implemented as a kill-switch feature in the malicious software, firmware, or hardware components. They can be introduced either physically or remotely, as part of the supply chain, or in operations. And they can stay dormant for arbitrary amounts of time and bring down infrastructure all at once."

The only way to recover is to open every server and physically connect to the BMC chip to deliver new firmware. This is something that is really not feasible in any significant data centre.

This attack can be performed at scale; unfortunately, the recovery is not at scale – it can only be performed one server at a time, with physical intervention.

This attack has not yet been seen in the wild.

More in this category: « German IT watchdog says no evidence to back Huawei spying claims Scientists claim better security with biological encryption keys »
Share News tips for the iTWire Journalists? Your tip will be anonymous