Cabin device ban on some US flights from Mideast Featured 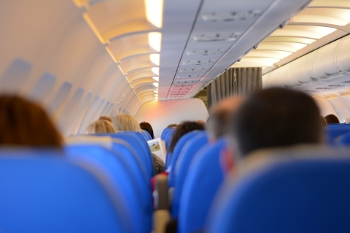 Most electronic devices have been banned from aircraft cabins in the case of some African and Middle Eastern airlines that fly directly to the US.

An American official was reported by CNN to have told the network this was due to security concerns about passengers boarding direct US flights from certain countries.

DEVELOPING: Electronics banned from cabins on some Middle Eastern and African flights to U.S. https://t.co/ZSwr9NiIrh pic.twitter.com/UDzoUSyvfu

The ban is said to be for a limited period which was not specified.

The US government last week announced a modified version of its ban on the movement of citizens from Muslim countries, with Iraq being removed from a list of seven countries that were included in an earlier ban. This ban, like the earlier one, has been halted by a court.

Only one country, Jordan, has announced that it is part of this group, with a tweet (now deleted) that said Royal Jordanian Airlines would allow only mobile phones and medical devices on-board from 21 March.

It said the advice was based on information from  "concerned U.S. departments" but did not offer any further clarification.

Royal Jordanian has deleted its tweet regarding the #electronicsban. pic.twitter.com/LdFsAPWfMy

All other devices, such as laptops, DVD players and game consoles have to be stored along with checked baggage.

Dept of Homeland Security Statement: "We have no comment on potential security precautions, but will provide any update as appropriate.” https://t.co/VHqUrQyQYn

While CNN said the Department of Homeland Security had no comment, the US State Department had confirmed that relevant countries and airlines were being informed of the device ban.

More in this category: « Vault 7: Cisco finds 0-day that affects 318 routers Vault 7: Plans to expose firms that do not patch flaws »
Share News tips for the iTWire Journalists? Your tip will be anonymous