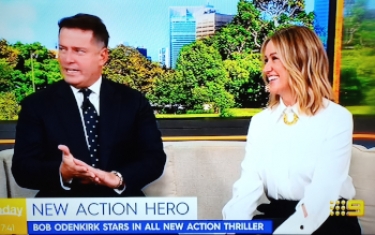 The Today show in progress on Monday. Sam Varghese

Channel Nine, the main TV channel owned by Nine Entertainment, has managed to put its breakfast show Today to air on Monday, a day after the show's weekend edition could not be aired on Sunday due to what the company has called a "cyber attack".

However, iTWire understands that the mess caused by the network attack is still being cleaned up and there is no assurance that all programming on Channel Nine will proceed as usual on Monday.

Ransomware is being rebranded cyber attack by victims. I don’t have an informed opinion as to if that’s a good or bad thing, but it’s definitely a pattern. https://t.co/UGlnbeFoc4

One of the company's main newspaper websites, The Age Online, appeared to be only partially updated this morning, judging by the stories that were online on Sunday evening.

The company said it had no update to offer about the attack this morning. Media reports indicate that Nine has not received any request for a ransom.

But a security source told iTWire there was no doubt that ransomware was involved, though it was not possible to point right now to any particular group as being responsible.

Maybe a Russian was forced to watch an episode of ‘Married At First Sight’ on @Channel9 & this then prompted the cyber attack.#auspol #ScottyFromCoverups #Media #Russia #Hackers #CyberAttack

Some media reports have drawn what appears to be a long bow, linking the attack to Nine's scheduling a program about Russia's use of chemical poisons to kill its enemies abroad, as part of its new Under Investigation series.

Presented by veteran Liz Hayes, the program is scheduled to go to air on Monday night. It has already looked at China's role in COVID-19.

Reports also say that the Australian Cyber Security Centre has been asked for help in tackling the aftermath of the attack.

"Ransomware-as-a-service has risen in popularity providing cyber criminals with the necessary tools to carry out these types of attacks.

"Compounding these risks is the adage of affiliate programs for ransomware groups, providing new and unique ways for malware operators to have others deploy their payloads for a cut of the eventual profits.

"We’re also seeing a lot of secondary extortion, in which cyber criminals look to profit twice from an attack, forcing organisations to not only pay to decrypt data but also prevent sensitive data from being sold or released publicly.

Could’ve been payback for this over 20 years ago: https://t.co/NqXqRjUoPv pic.twitter.com/tJlIdMW52W

"Organisations should invest in workload security micro-segmentation, as well as identity and access solutions that are built into their cloud stacks, rather than bolted on after the fact.

"There are a lot of solutions that are deployed into cloud environments but weren’t built with cloud threats in mind. Organisations should look to technologies that intrinsically deliver security as part of the solution.

"If organisations don’t have the expertise in cloud security, they should look to partner with a vendor or managed service provider who can deliver those services effectively.”