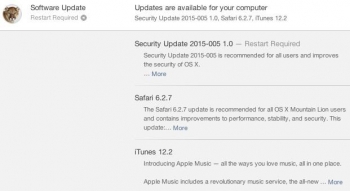 Apple has release multiple security updates for its Mac system software, along with a new version of iTunes.

Alongside iOS 8.4, Apple has released security updates for OS X, the Safari web browser, and the QuickTime multimedia software.

QuickTime 7.7.7 for Windows 7 and Vista has also been released to provide the relevant patches.

Back to OS X, changes to the graphics drivers for Nvidia and Intel perform improved bounds checks to address buffer overflow issues that could allow arbitrary code execution with system privileges.

The certificate trust policy has also been updated, the 'Logjam' SSL/TLS issue has been addressed, the locking of EFI flash memory when waking from sleep has been improved (the EFI patches are available separately as Mac EFI Security Update 2015-001 for Mountain Lion and Mavericks), and certain issues around code signing have been rectified.

A Yosemite-specific change addresses a flaw that allowed unsigned kernel extensions to be loaded under certain conditions.

One of the more curious issues concerns Mail. The version included in Yosemite 10.10.0 to 10.10.3 allowed the content of an HTML message to be replaced with an arbitrary web page.

Another concerns Spotlight, where "A command injection vulnerability existed in the handling of filenames of photos added to the local photo library."

Open source components that have been updated but not already mentioned include libtiff, OpenSSL, SQLite and unzip.

The latest version of Safari - 8.0.7 - is included in the OS X Yosemite 10.10.4 update. It is also available separately from the Mac App Store, along with Safari 7.1.7 and 6.2.7 for Mavericks and Mountain Lion respectively.

This latest set of updates is consistent with Apple's unstated but apparent policy of only releasing security updates for the current version of OS X and its two most recent predecessors.

In related news, Apple has also released iTunes 12.2 with support for the new Apple Music service. It is available from the Mac App Store.

More in this category: « Australian organisations slipping on security: Dell Landesk brings WinMagic SecureDoc into the fold »
Share News tips for the iTWire Journalists? Your tip will be anonymous