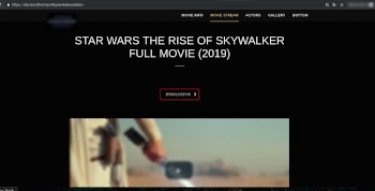 Researchers from security firm Kaspersky have found more than 30 fraudulent websites claiming to offer free downloads of the last Star Wars film, which opened on 19 December, but actually harvesting users' credit card data while they register for the expected free download of the film.

The company said the names of these sites were styled to appear genuine and contained plenty of data about Star Wars: The Rise of Skywalker to give the impression that they were kosher.

The practice of adopting names that appear to be genuine called black SEO and it allows criminals to promote phishing sites so that they appear at the top of search results, when people search for "name_of_film watch free" and the like.

To make the bogus website appear legitimate, the people behind them also set up Twitter and other social media accounts and used them to distribute links to the content. Kaspersky researchers said they had found that so far 83 users had been affected by 65 malicious files disguised as files of the film.

"It is typical for fraudsters and cyber criminals to try to capitalise on popular topics, and ‘Star Wars’ is a good example of such a theme this month. As attackers manage to push malicious websites and content up in the search results, fans need to remain cautious at all times," said Kaspersky security researcher Tatiana Sidorina. 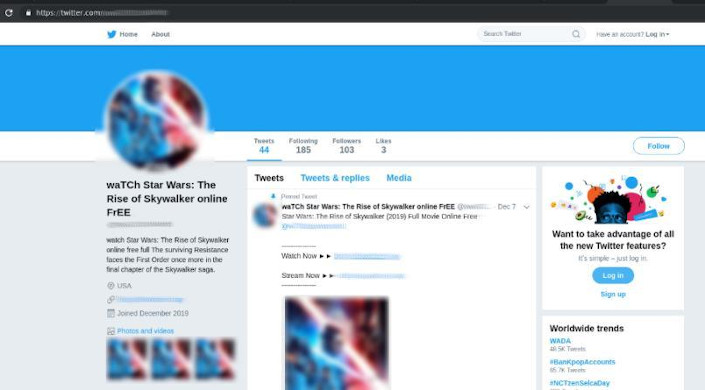 "We advise users to not fall for such scams and instead enjoy the end of the saga on the big screen."

Apart from phishing, attackers also use files with names similar to those of films to spread malware.

"In 2019, Kaspersky detected 285,103 attempts to infect 37,772 users seeking to watch movies of the renowned space-opera series, signifying a 10% rise compared to last year," the company said.

"The number of unique files used to target the users amounted to 11,499 - a 30% drop on last year. The data shows that even years after the film’s premiere, a significant number of users will still seek to download malicious files in the hope of watching the famous space adventures free."

The company offered the following advice to fans:

More in this category: « Hacked with friends: 173M Zynga accounts breached Global forex dealer Travelex taken down by Windows malware »
back to top