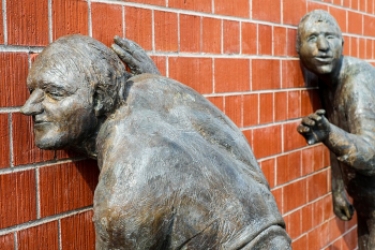 Australian Federal Police commissioner Reece Kershaw and Australian Criminal Intelligence Commission chief executive Michael Phelan have both played down suggestions that the Australian Signals Directorate could be given expanded powers to carry out domestic surveillance in order to help track down people who are indulging in sexual abuse of children.

But a few hours later, the ABC reported that the Federal Government was indeed developing a proposal to bring the ASD into the picture or else give the AFP additional powers in the cyber realm to act.

During an address at the National Press Club on Wednesday — organised on the day when the Australian Institute of Criminology released a study that showed 256 Australians had spent about $1.3 million to purchase child sexual abuse material — both Kershaw and Phelan reacted to a query from the ABC's political editor Andrew Probyn, saying that the ASD was already helping in tackling child sexual abuse to the extent it could within existing law.

Probyn was the lone journalist to ask a question about whether an expanded role was being contemplated for the ASD, with this being the elephant in the room after Phelan and Kershaw, and also the third speaker of the day, Australian Transaction Reports and Analysis Centre chief executive Nicole Rose, mentioned more than once in their presentations that technology had outpaced the legislation and that more laws were needed to deal with the crimes being perpetrated on children.

Last year News Corporation newspapers reported that the ASD was looking at extending its surveillance to Australians. In 2019, the AFP raided the home of Annika Smethurst, the reporter who wrote the story. News Corporation has taken the AFP to court over the raid and the case is still in progress.

Another constant theme mentioned by the speakers was the use of encryption by criminals, with Facebook's plans to extent end-to-end encryption to its Messenger client meriting special mention.

Phelan said the inability of the authorities to access details about offenders was due to many taking refuge on the dark web. He did not specify whether he meant Tor, I2P or Freenet, the three most commonly known dark webs.

The Coalition put in place a law in December 2018 which gives law enforcement powers to force companies to decrypt material if asked to do so, using one of three approaches.

Finally, a “technical capability notice” can be issued by the Attorney-General at the request of an interception agency. This will force a company to help law enforcement, by building functionality. However it cannot include the decryption of information or removal of electronic protection in any system.

Amendments to the laws, which have been criticised by technically qualified people from many countries, are yet to be passed.