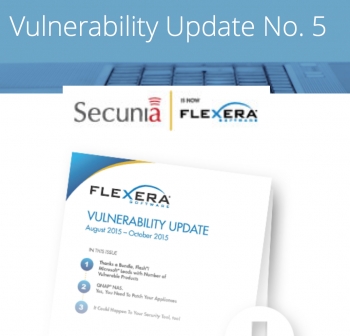 Flexera Software, which acquired Secunia, has released its latest Vulnerability Update with IBM no longer topping the list but Microsoft leading it instead.

Flexera’s new Vulnerability Update 5 covers the Top 20 products with the most vulnerabilities from August to October 2015 has been released.

The company bills itself as a leading ‘provider of next-generation software licensing, compliance, security and installation solutions for application producers and enterprises.’

Since releasing its Vulnerability Updates in 2014, the total number of recorded vulnerabilities in the three Top 20’s was 2,450, and with 12 product entries, Microsoft products outnumber IBM’s eight product entries.

Flexera says its ‘Vulnerability Update is a recurring report based on data from Flexera Software’s Vulnerability Database.’

The report provides a Top 20 per month of products with the most vulnerabilities recorded over a three month period, along with brief comments from Secunia Research at Flexera Software.

In this edition, which can be freely downloaded here, Secunia Research (which Flexera acquired) provides commentary on QNAP NAS, a network attached storage device, used for data storage by private users and small businesses, and on vulnerabilities in security tools like AlienVault Unified Security ManagementTM (USM).

The report also puts Microsoft as the vendor with the most vulnerable products over the three month period – a position held by IBM in previous Vulnerability Updates.

Kasper Lindgaard, Director of Secunia Research at Flexera Software said: “The reason so many Microsoft products are in the Top 20 lists this time is that both Microsoft Internet Explorer and Microsoft Edge come bundled with Adobe Flash, adding the 35 Flash vulnerabilities listed in August to Windows 8 and upwards.

“This means that for Windows systems from 8 and later, the 35 vulnerabilities in Adobe Flash Player are added to the Microsoft vulnerabilities, resulting in these products climbing higher than they otherwise would.”

Separately, there’s another lesson for consumers, and that’s for us to start patching our fridges!

Details below, please read on!

Flexera says its report ‘also touches on one of the new challenges facing the IT industry: the Internet of Things (IoT), which is bringing more internet-connected devices into businesses and the homes of consumers.’

‘IoT impacts both the ‘old’ IT guard - application producers, and the security community - and newcomers, like manufacturers creating Internet-connected intelligent devices, who must start integrating software security into their product strategy.’

Lindgaard concluded by stating: “With the IoT trend comes the necessity to educate businesses and consumers and get them to treat their connected devices – from telecommunications equipment and medical devices to toasters, thermostats and cars - like their PC’s, full of updateable software that can be vulnerable to hackers.

“We need to get businesses and consumers to start applying security updates to their devices, just as they should be doing to the software on their PCs and mobiles. The problem is, that even though we have been trying to get the “apply security updates” message across for more than 10 years, consumers still are not sufficiently aware that they need to do so.”

More in this category: « AVG’s 2016 Online Safety Predictions Identity as a service – IDaaS - only we know who you are »
Share News tips for the iTWire Journalists? Your tip will be anonymous