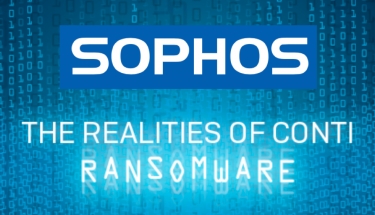 New research from Sophos details the "day-by-day unfolding of a human-operated Conti attack using fileless ransomware", with background on the ransomware’s behaviours, and defender advice.

Cyber security company Sophos has published its new "three-part series on the realities of Conti ransomware", revealing what really happens when cyberattackers break into an organisation’s network, detailing how an attack unfolded over five days, its technical features and attack behaviours, and defender advice for IT admins, security researchers and security operations professionals.

Conti is a human-operated “double extortion” ransomware that steals and threatens to expose information as well as encrypting it.

Ransomware is one of the most prevalent threats to Australian organisations and individuals - and to everyone globally. Often seen as a technical issue, it’s easy to forget about the ‘human factor’ but behind the crime there is an individual or network of people driving the attack, so what does it look like behind the scenes?

We're told that the first article, “A Conti Ransomware Attack Day-by-Day”, presents "a timeline of an active Conti ransomware attack, from the initial compromise to the recovery of the target’s operations."

Naturally, Sophos explains that its Sophos Rapid Response team, which is a 24/7 incident response team, "neutralised, contained and investigated the attack."

The article also includes Indicators of Compromise (IoCs), and tactics, techniques and procedures (TTPs) to help defenders look for and prepare against future Conti attacks.

The second article is a technical one by the SophosLabs researchers, “Conti Ransomware: Evasive by Nature”, which we're told "shows how the attackers try to obstruct analysis of the ransomware by deploying legitimate Cobalt Strike beacons onto compromised machines and then loading code directly into memory during their attacks, leaving no artefacts for investigators to find and examine."

“We discovered that the attackers managed to compromise the target’s network and gain access to domain admin credentials within 16 minutes of exploiting a vulnerable firewall. Within hours, the attackers were deploying Cobalt Strike beacons to servers that would form the backbone of the ransomware attack.

“In attacks where humans are at the controls, adversaries can adapt and react to changing situations in real time. In this case, the attackers had simultaneously gained access to two servers, so when the target detected and disabled one of these – and believed they’d stopped the attack in time – the attackers simply switched and continued their attack using the second server. Having a ‘Plan B’ is a common approach for human-led attacks and a reminder that just because some suspicious activity on the network has stopped, it doesn’t mean the attack is over.

“After exfiltrating data, the attackers deployed Cobalt Strike beacons to nearly 300 devices and launched the ransomware. The target was left with little choice but to shut down critical infrastructure and work operations. The target then contacted Sophos, and we were able to start neutralising and containing the attack within 45 minutes. Within a day, the target was able to recover unprotected affected computers and resume operations,” continued Mackenzie.

The "Conti News" site, which is a site we won't link to (as it could well be infected if it is even still up) is from Conti's creators, and it has published data stolen from at least 180 victims to date, with two diagrams of information provided from that site created by Sophos embedded below.

This article continues after these two images, with the third in the Sophos series entitled "What to expect when you've been hit with Conti ransomware" - please read on! 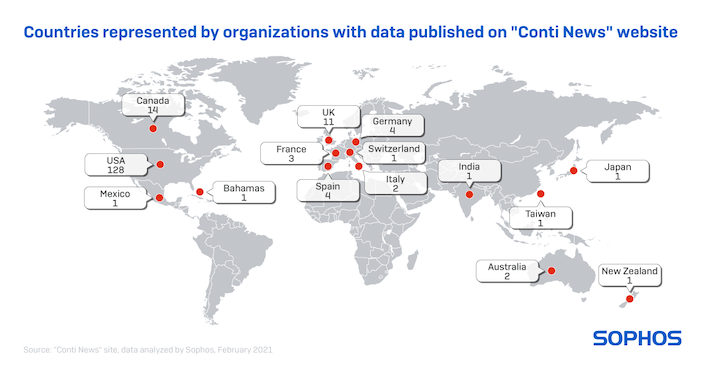 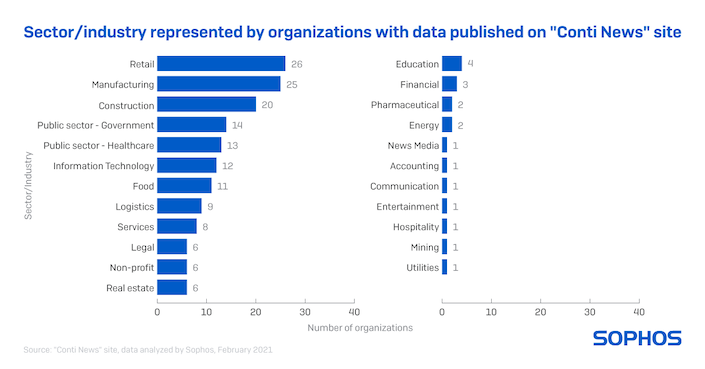 The third article is entitled: “What to Expect When You’ve Been Hit with Conti Ransomware", with Sophos stating that it "provides essential guidance for IT admins facing the impact of a Conti attack.

"The article covers what to do immediately and then provides a 12-point checklist to help IT admins investigate the attack. The checklist walks defenders through everything the Conti attackers could do while on the network and the primary TTPs they are likely to use. The article includes recommendations for action."

Mackenzie added: “In companies without access to a designated IT security team, it’s often IT admins who are in the direct line of fire for a ransomware attack.

“They’re the ones who come into work one morning to find everything locked and a threatening ransom note on the screen, sometimes followed by threatening emails and even phone calls. Based on our first-hand threat hunting experiences, we’ve developed an action list that will help IT admins get through the deeply challenging and stressful first few hours and days after a Conti ransomware attack, understand where they can get help, and lay the foundations for a more secure future.”

So, what is "Immediate Advice for Defenders" from Sophos?

Sophos says it "detects components of Conti under one or more of the following definitions: HPmal/Conti-B, Mem/Conti-B, or Mem/Meter-D", and says that "IoCs and the main TTPs for Conti ransomware and the attacks covered are posted on SophosLabs’ GitHub page."

Late last year, iTWire conducted a video interview with Aaron Bugal, the Global Cyber Security Solutions Enabler at Sophos, on the company's 2021 Threat report, which you can see here.

More in this category: « Data breaches lead to loss of trust – and business Microsoft says Azure, Exchange source code accessed by attackers »
Share News tips for the iTWire Journalists? Your tip will be anonymous