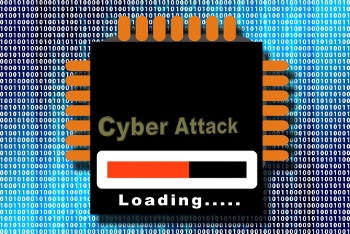 Ninety per cent of organisations studied by the Australian Cyber Security Centre for its 2016 survey were confronted by either an attempt, or a successful, cyber compromise during the last financial year.

The ACSC said that 86% of the organisations in the survey had seen bids to gain entry into systems or to compromise their network data.

A total of 113 organisations completed the survey in 2016: 68 private sector and 45 government organisations. All are partners of the ACSC. While it admitted that the sample was a modest one, the ACSC said it included some of the most significant systems of national interest.

Of the organisations, 60% faced situations that had a "tangible impact" on their businesses due to either an attempted or successful break-in.

"The fact that most organisations rated these incidents as relatively low in severity, but can still point to real business impacts as a result, should give pause for thought," the ACSC said. 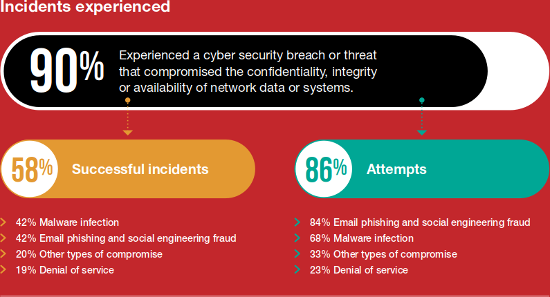 Given that 51% said that they were alerted to possible breaches by outsiders before being made aware by internal sources, the ACSC said this suggested there was insufficient attention paid to monitoring networks; this was underlined by the fact that just 2% of the survey sample had completely outsourced IT functions.

The survey sample was quizzed about the measures taken to protect themselves and many said they had a range of controls in place. Unsurprisingly, where attitudinal resilience was found to be low, the same was true of counter-cyber risk controls.

The ACSC said that in organisations where policies such as bring your own device were practised, there was also a relaxed attitude to cyber security.

But at the same time there had been improvements, with the survey finding that 71% of organisations saying they had a cyber security incident response plan in place compared with 60% in the 2015 ACSC survey of major Australian businesses.

"Of all organisations that have incident response plans, less than half (46%) regularly review and exercise these plans," the ACSC said. "Fifteen percent either never test the plan, or test it on an ad hoc basis, with 24% testing less than once a year.

"As the threat environment continually evolves — with new software, tools, technologies and techniques constantly released — these plans must be regularly reviewed and updated in order to remain effective."

Guy Eilon, country manager of the cyber security firm Forcepoint, said the survey results should provide "a much-needed jolt" to organisations to review their cyber-security measures.

They should "ensure they are set up to protect their organisation from a raft of cyber-security threats – both inside and outside their perimeter," Eilon said.

"With almost all Australian organisations the target of multiple cyber incidents in the past year, the question today is no longer if, but when, an organisation will come under fire. However, despite a large proportion of these incidents proving damaging to organisations in some way – cost or reputation – it is concerning that few are truly set up to combat theses relentless threats."

Eilon said on the one hand it was encouraging "to see that systems, processes and awareness training are in place in many businesses to mitigate external threats".

But on the downside, he said, "it would appear the same care is not yet being taken to address the risk from inside the perimeter. Nearly half of respondents do not have a process to identify critical systems and data, and fewer still (38%) have in place a data loss prevention system – despite the fact that more than three quarters rank the protection of customer or consumer data as of the highest importance".

A senior official from BAE Systems Applied Intelligence said while the survey showed that Australian businesses had good protection in place, much more needed to be done to protect the country's critical infrastructure.

Michael Shepherd, director and regional managing director for Australia and NZ, International Services & Solutions, said: " “It’s worrying that just over half (51%) of all organisations surveyed said they tend to be alerted to possible breaches by external parties before they detect it themselves. It’s clear that businesses need to do a better job in detecting and diagnosing threats.”

Shepherd added that crucial to improving cyber resiliency within critical infrastructure was the task of elevating the importance of threat intelligence and analysis within the industry.

"The first step to this is creating a culture of information sharing between government and the private sector," he said. "The two-way provision of reliable and timely information is critical to help better protect national and critical infrastructure companies from the growing number of cyber-espionage, denial-of-service and other attacks that threaten these organisations."