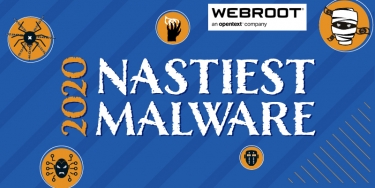 Webroot has released its annual list of the Nastiest Malware, "revealing phishing, botnet attacks and ransomware as 2020’s most vicious cybersecurity threats".

Webroot. It bills itself as securing businesses and individuals worldwide with threat intelligence and cyber resilience, with total endpoint protection and disaster recovery for all.

With 2020 being the crazy year it has been, the company tells us "it’s no surprise that cybercriminals have taken advantage of the global pandemic, as millions have been forced to shift how they work and live, to find ways to make old tricks new again".

Webroot's list of the Nasiest Malware is now in its third year, with the company ranking the year's biggest cyber threats to determine "which ones are the absolute worst".

Somewhat unsurprisingly, we're told, "phishing and RDP-related breaches remain the top methods we’ve seen cybercriminals using to launch their attacks. Additionally, while new examples of malware and cybercriminal tactics crop up each day, plenty of the same old players, such as ransomware, continue to get upgrades and dominate the scene".

An example given at Webroot's blog post on the topic, written by Webroot's Justine Kurtz, is "a new trend in ransomware this year being the addition of a data leak/auction website, where criminals will reveal or auction off data they’ve stolen in a ransomware attack if the victim refuses to pay.

"The threat of data exposure creates a further incentive for victims to pay ransoms, lest they face embarrassing damage to their personal or professional reputations, not to mention hefty fines from privacy-related regulatory bodies like GDPR".

However, the main trend Webroot is highlighting "is that of modularity", with today’s malicious actors adopting "a more modular malware methodology, in which they combine attack methods and mix-and-match tactics to ensure maximum damage and/or financial success".

Tyler Moffitt, Security Analyst at Webroot said: “2020 has been a year of change, but one thing remains consistent: cybercriminals are relying on same old tricks to secure their financial treats, because they continue to be successful. The pandemic has resulted in more distractions for online users and lowered overall skepticism in a more casual, remote work environment. These vulnerabilities create opportunities cybercriminals, making it increasingly critical to prioritize cyber resilience for people, devices and cloud, before it’s too late.”

"Phishing is a key part to a malware campaign’s effectiveness, and its popularity with cybercriminals has not stopped growing since it first emerged decades ago. Getting a victim to fall for phishing is the first step in many infections, which will lead to theft of important credentials, further malicious payloads on the machine, and eventual ransomware infections.

"This year, many threats are taking advantage of the situation created by the pandemic, and almost all the malicious spam emails (malspam) phishing lures used by malware are based on COVID-19".

Here are some of the ones Webroot has seen:

"Ransomware did everything but slow down in 2020, largely due to COVID-19 phishing lures, with several notable attacks from healthcare to municipalities to education. Ransomware encrypts a victim’s files and then demands payment in order to restore access. In 2020, a new trend emerged with ransomware gangs creating “leak sites” where they expose or auction off a victim’s sensitive data if they refuse to pay".

The three nastiest ransomware threats include:

"Botnets continue to be a dominant threat in the security landscape. They are essential to the success of ransomware, and many of the top offenders listed below have close ties to top ransomware. Botnets are responsible for most of the malicious spam email campaigns and after a user clicks to infect themselves from email, they gain foothold in the environment, so the eventual ransomware payload does as much damage as possible".

The nastiest botnet and Trojan threats include:

"2020 has brought an unexpected rise in mobile threats, earning them an honorable mention on this year’s list. Many of them masquerade as COVID-19 tracing apps, preying on the fear generated by the pandemic. Others abuse app accessibility features to steal user information".

The nastiest mobile threats include:

For more information, visit the Webroot Community or watch the videos on botnets, phishing and ransomware.