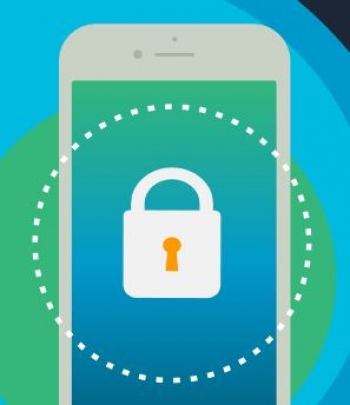 The number of new disclosed iOS (CVE) vulnerabilities in the first quarter of 2017 was greater than all of 2016, according to mobile threat defence vendor Skycure. It predicts 643 CVEs for the year in total.

Its Mobile Threat Intelligence 2017 report titled “10 years of hacking iOS” says the number of patched vulnerabilities is not an indication of how insecure a platform is, but rather how intensely hackers attempt to break into the platform. While known vulnerabilities will be eventually patched, iOS code is constantly evolving, with new features, so hackers can expect a cornucopia of new vulnerabilities to exploit.

Skycure says that each Common Vulnerabilities and Exposures (CVE) gets a score from 0-10 indicating its potential impact on the security of the system. It notes that there are a lot more 10s for iOS today than there used to be.

Yair Amit, co-founder and chief technology officer of Skycure, said, “iOS has had a profound effect on the security of enterprises. The iPhone ushered in the trend of BYOD, and the concept of apps and the app store, changing how IT manages corporate networks and equipment. The impact of iPhones and iPads on work productivity means more employees are choosing iOS devices for BYOD, and that makes iOS a valuable target for hackers.”

Skycure makes it clear it is not having a go at Apple. Amit adds, “Increasing malware and vulnerabilities demonstrate that hackers want to break into iOS devices – it is the new target. Enterprises need to make sure that they don’t find a way in.”

The report says that malware on iOS devices is becoming more prevalent as the sophistication of exploits continues to increase. The rate of iOS malware has continued to increase and tripled from Q3 2016 to Q1 2017. 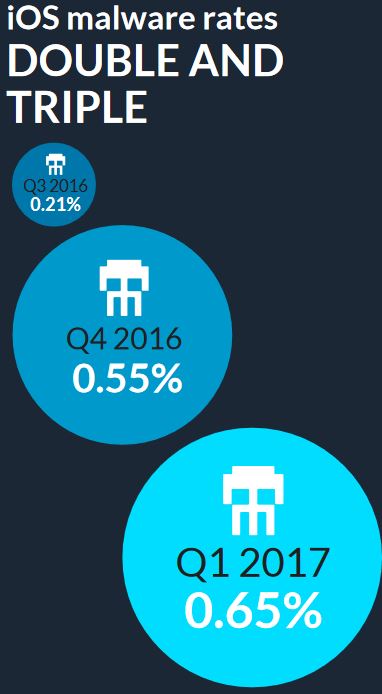 “Apple does a tremendous job of keeping malware out of the App Store. A common misconception is that iOS devices can’t get malware because apps must come from the Apple App Store. In truth, there are many ways to infect an iOS device,” the report says. 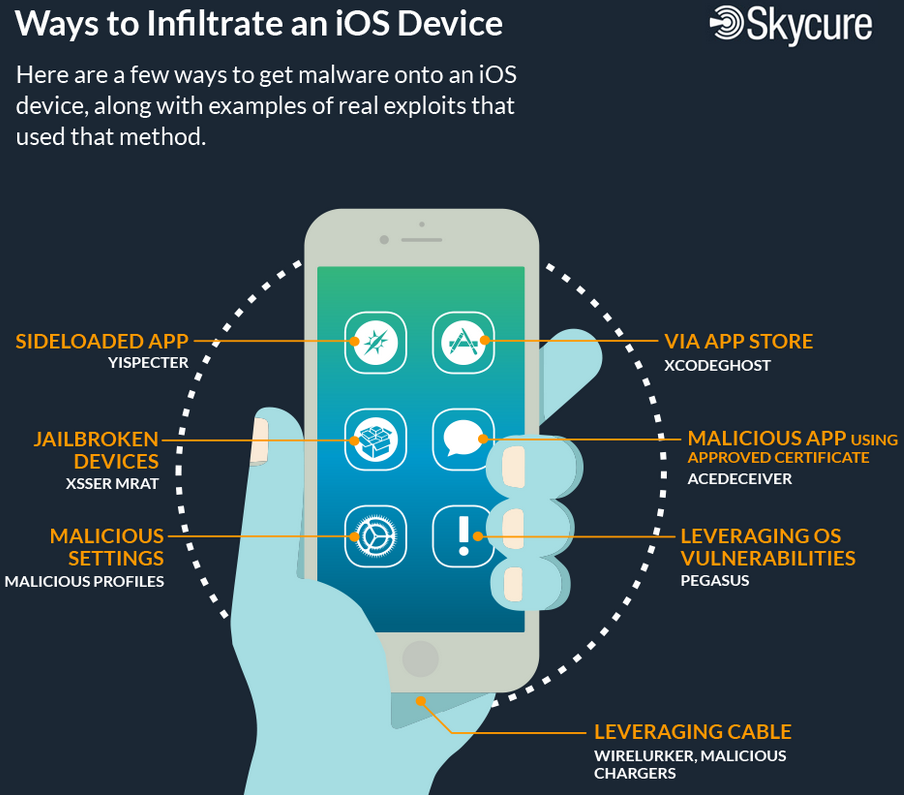 “But today’s attacks are becoming very good at hiding their presence to extend the period of control or spying access. XcodeGhost exploited the iOS development environment itself to get malware into the App Store. The report includes a 'Mobile Kill Chain' to demonstrate the step-by-step process used by the most dangerous mobile threats today, beginning with targeted social engineering to get the victim to click or install something, then jailbreaking the device, and ending with the bad guys having access to GPS, camera, microphone, SMS, email, and other apps.”

The report says iOS exploits can be sold for millions. One of the most advanced attacks to date is Pegasus spyware, exploiting three separate vulnerabilities to track and spy on a victim and everything that takes place on a device. Three hundred exploit “seats” were sold for US$8.2 million.

The report concludes with the question – are iOS devices riskier?

Putting aside jailbroken devices where the owner allows root access for their own reasons, in an enterprise sense it all comes down to network access.

It says iPhones are more commonly the primary device for an enterprise user, and most are left on constantly and travel with the user, so it makes sense that more of them are exposed to network threats. About 21% of the mobile devices will be exposed to a network threat in the first month of security monitoring. This number goes to 41% over the next three months.

A network threat may be a malicious Man in the Middle (MitM) attack that decrypts SSL traffic or manipulates content in transit to or from the device. It can also be a simple misconfigured router that exposes otherwise encrypted data for anyone to view.

Regardless of how malicious the intent of the network threat is, individuals and organisations would be wise to avoid any network that does not accurately and securely perform the connection services originally requested by the user and the device.

More in this category: « Aussie employers falling prey to inside jobs: data theft and cyber attacks FBI warns Internet-connected toys are insecure »
Share News tips for the iTWire Journalists? Your tip will be anonymous