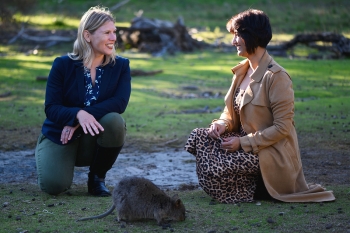 Microsoft has awarded the University of Western Australia an AI for Earth grant to support its work to protect threatened species, undertaken as part of the global DNA Zoo initiative.

The global DNA Zoo brings together more than 55 collaborative partners in eight countries – in critically important work - in a bid to slow, and then arrest the rate of extinction by empowering the threatened species through greater access to high quality genomic resources.

The University of Western Australia (UWA) is the leading Australian node institution that collects, sequences and analyses animal DNA as part of the DNA Zoo initiative.

Around 1 million animal and plant species are on the road to extinction according to a recent report from the United Nations. “It’s a truly shocking statistic – but there is hope. The report says it’s not too late to make a difference as long as we start now and tackle the issue at every level, local to global,” says Microsoft.

An AI for Earth Microsoft Compute Grant has been awarded to DNA Zoo for a project which will develop the concept of using scat retrieval drones (SRDs) to collect samples that can be used for DNA-based species monitoring.

According to Jennifer Marsman, principal engineer on Microsoft’s AI for Earth program; “preserving biodiversity is one of the most important challenges facing scientists today. Microsoft has a deep commitment to sustainability, and we understand that our responsibility extends beyond our own operations to innovating towards a healthier and better future more broadly”.

“By putting AI in the hands of researchers and organisations we can use important data insights to help solve important issues related to water, agriculture, biodiversity and climate change.

“AI for Earth is more than just grants – Microsoft is helping to bring transformative solutions to commercial scale and offering open source API solutions to help organisations everywhere boost their impact. We are delighted to be able to support DNA Zoo and through that the University of Western Australia on this profoundly important work collecting, sequencing and analysing animal DNA.”

UWA Associate Professor Parwinder Kaur is a director of the Australian DNA Zoo node and notes that this scale of analytics has previously been beyond the scope of conventional computing, instead relying on high performance computing.

“It’s a classic big data challenge. The genome of a single mammal may run to 3.2 GB. To properly understand the genome, it needs to be read 50 times – creating a 172 GB data challenge for a single animal. Multiply that challenge across entire populations of threatened species and the scale of the computing and analysis problem is clear.

“Using Microsoft cloud, artificial intelligence and machine learning we hope to be able to automate and accelerate genome assemblies and subsequent analysis.”

The AI for Earth grant will allow DNA Zoo to use Microsoft cloud computing to “democratise” genome assemblies worldwide with the resultant insights used to help protect and preserve threatened species.

Data collected through the DNA Zoo program is open source and can be integrated with other open source data collections with machine learning applied to search out patterns that might provide additional insights to protect threatened species.

Comparative genomics also allows the DNA of threatened species to be compared with that of plants or animals which appear to thrive – again in the search for clues of how to slow or reverse the decline.

Microsoft says the insights may help explain, for example, why quokkas Australia’s “cutest little marsupial” thrive on Rottnest Island but struggle on the mainland only 22km away.

“We welcome the support from Microsoft, DNA Zoo and UWA that will add to our knowledge of the quokka in ensuring its ongoing survival.”

In Australia, DNA Zoo will concentrate on the 40 most critically threatened mammals as a priority while finding resources to extend the same to a long list of 437 identified endangered species.

Published in Science
Tagged under