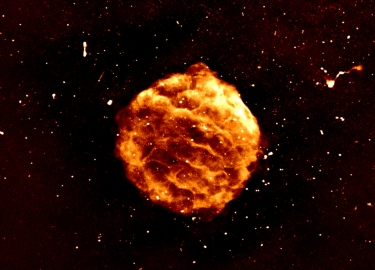 Australian supercomputer Setonix has announced it has produced a highly detailed image of a supernova remnant after the computing system’s first stage was made available to researchers.

Data used to create the image was collected in collaboration with CSIRO’s Askap radio telescope on Wajarri Yamatji Country in Western Australia.

The data was then transferred to the Pawsey Supercomputing Research Centre in Perth via high-speed optical fibre.

Setonix is named after quokka (Setonix brachyurus), Western Australia’s favourite animal. It is a part of the Pawsey Centre’s $70 million capital upgrade.

The new supercomputer is being installed in two stages. The first stage is underway, and the second stage is expected to be completed later this year.

“Processing data from Askap’s astronomy surveys is a great way to stress-test the Setonix system and see what is possible,” said Elahi.

Like Setonix, Askap is also ramping its full operations. It is wrapping up a series of pilot surveys and will soon undertake even larger and deeper surveys of the sky.

Setonix will process the data collected by Askap.

CSIRO Askap team researcher Dr Wasim Raja said the supernova remnant’s dataset was selected to test the processing software on Setonix, given the challenges involved in imaging such a complex object.

“The speed at which we reproduced our current workflows is a good sign as we look to improve and optimise them to fully exploit Setonix’s capabilities,” Raja said.

“Setonix’s large, shared memory will allow us to use more of our software features and further enhance the quality of our images. This means we will be able to unearth more from the ASKAP data.”

When fully operational, Setonix claims it will be 30x more powerful than Pawsey’s earlier Galaxy and Magnus systems combined.

This will allow for more processing of the vast amounts of data coming in from many projects, and more science will be achieved in a fraction of the time.

This first appeared in the subscription newsletter CommsWire on 9 August 2022.

More in this category: « Quasar Satellite poised to deliver space data using cryogenically cooled communications solutions FirstWave helps NASA to put the first woman and first person of colour on the moon »
Share News tips for the iTWire Journalists? Your tip will be anonymous