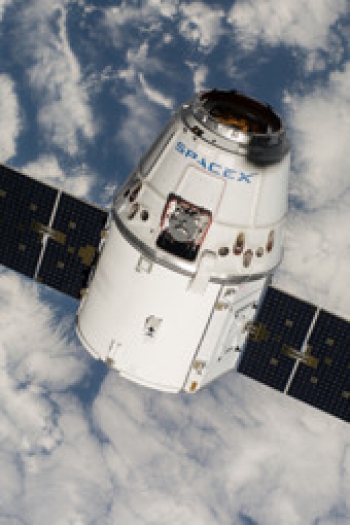 SpaceX's Dragon spacecraft SpaceX
The SpaceX Falcon 9 rocket and the Dragon spacecraft are set to launch to the International Space Station on Tuesday, January 6, 2015, at 6:00 a.m. EST.
Five successful missions (four of them re-supply missions) to the International Space Station have beenalready added to SpaceX's resume.
This sixth mission to the ISS, and fifth resupply mission (CRS-5, or Commercial Resupply-5), is set to launch from Space Launch Complex 40 (SLC-40) at the Cape Canaveral Air Force Station in Florida.
The launch attempt is scheduled for Tuesday, January 6, 2015, with the launch window opening at 6:00 a.m. Eastern Standard Time (EST).
A live launch webcast will begin at approximately 6:00 a.m. EST.
Watch the launch at:
The cargo for the CRS-5 mission includes the Cloud Aerosol Transport System (CATS), which is a light detection and ranging remote sensing instrument that is designed to measure the location, composition and distribution of pollution, dust, smoke, aerosols and other particulates in the atmosphere.
Also a part of the mission is the attempt by SpaceX to return the first stage of the Falcon 9 rocket through the atmosphere and to land it on a 90-meter by 50-meter (300-foot by 160-foot) floating platform
The platform is called the autonomous spaceport drone ship, an ocean-going, barge-derived, floating landing platform that SpaceX will use to land returning first-stage boosters.
The drone ship platform is part of a system (called the reusable launch system development program) being developed by SpaceX that will drastically lower the cost of space launch services.
Read 17048 times

More in this category: « Quadrantid meteor shower hoping to give short but dazzling show in early 2015 Inmarsat and Aussie aviation partner on global flight tracking »
Share News tips for the iTWire Journalists? Your tip will be anonymous