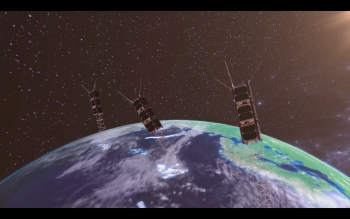 The contract, valued between approximately $50 million and $75 million, involves the deployment by Sky and Space of up to 200 nano-satellites.

Under the contract, the first delivery of nano-satellites from GomSpace will be in 2018, with the full constellation to be deployed and operational by 2020 in line with the current schedule.

According to Sky and Space (ASX:SAS),  the GomSpace nano-satellite construction contract costs will be distributed over the term of the agreement, with the total cost depending on the number of nano-satellites constructed for the Equatorial constellation, with several options including development, services, and choice of satellites.

Wednesday’s announcement comes as the company readies the launch of its "3 Diamonds" commercial demonstration nano-satellites, which have been designated as "Ready for Launch" by GomSpace, who were enlisted to build them under a separate contract.

The satellites are scheduled to be launched early this quarter.

Once launched, the full constellation of nano-satellites will service equatorial countries in South and Central America, Africa and Asia, as well as airliners and shipping companies in the coverage area.

Sky and Space Global’s chief executive officer Meir Moalem said, “We are getting very close to the launch of our first 3 Diamonds, but the goal is to build a communication network, based on a constellation of nano-satellites.

“This contract with GomSpace is another step towards our mission to provide a commercial, revenue-generating service that delivers communications to anyone, anywhere, anytime. We are very happy to continue working with GomSpace which have proven their value and capabilities.”

GomSpace chief executive Niels Buus said the company believed that “with this project SAS — seconded by GomSpace — will be making a breakthrough for nano-satellites in the professional low earth orbit satellite business”.