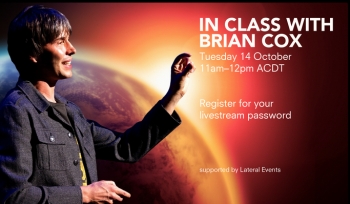 British 'superstar' physicist Brian Cox engaged Australian students with a live Q&A session on 14 October, streamed exclusively to registered schools as a part of his pre-tour in Australia, with the help of some Aussie 'digital roadies.'

Over 16,000 students, teachers and parents watched the presentation that was streamed live from the Science Exchange in the Adelaide CBD – the Royal Institution of Australia’s (RiAus) home of science education.

Cox, described as a 'superstar of science', talked about the creation of the universe, how the brain is linked the cosmos and his 90's band D:Ream.

The streaming came courtesy of Hostworks, long-term partner to RiAus, and its team of what it describes as 'digital roadies', in what was reportedly the largest-ever Australian education stream.

“Professor Cox was prepared to work with us in this fashion in order to be able to reach as many students as possible. The live stream format encourages a great level of engagement and interaction, and having someone presenting to the students who has such a high profile is also greatly beneficial,” said Bradley Abraham, General Manager, RiAus.

RiAus is a not-for-profit national science hub based in Adelaide.

Australian students from urban, regional and rural schools sent in their science-related questions for Professor Cox to answer live during the talk, 'In class with Brian Cox.'

The streaming reached students from eight to 16 years of age, from all around Australia including regional towns such as Renmark in South Australia, Penguin in Tasmania and Alice Springs in central Australia. Home-schooled students also had the chance to participate.

Hostworks enabled RiAus to stream Professor Cox to all parts of the country through its designed, built and operated content delivery platform, ‘Media Foundry’.

“It is a humbling opportunity for Hostworks and a privilege of great magnitude in being able to support, not only an event such as this, but to support RiAUS, as a not-for-profit organisation," said Will Berryman, CEO, Hostworks.

"We see this type of event as an opportunity to open up a whole new genre of communications. The mission of RiAus leaves boundless ideas and potential to innovate on the platform. Its exciting for us to work with these imaginative and passionate professionals and this kind of project allows us to showcase a new and innovative way to distribute content; in ways we wouldn’t necessarily do so and to an audience we wouldn’t necessarily reach,”

Available as downloadable content via RiAus from the 20 November, the video will provide teachers with a high quality, professional development resource available any time. The event follows Hostworks' streaming production of Coldplay, whose Sydney concert reached a massive 60,000 fans online.

In related news science, technology, engineering and mathematics (STEM) subjects in schools are set to receive a hefty boost, with the Abbott government announcing $12 million in additional funding to improve the focus onsubjects in Australian primary and secondary schools.

More in this category: « Australia: Lunar eclipse tonight Virgin Galactic's SpaceShipTwo crashes during a test flight »
Share News tips for the iTWire Journalists? Your tip will be anonymous