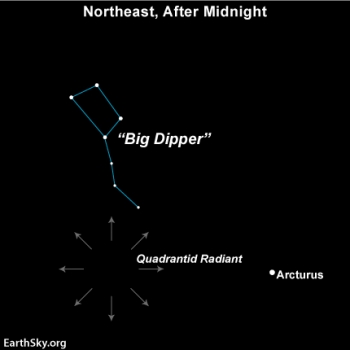 Locate the Quadrantid radiant in reference to the Big Dipper and the bright star Arcturus. EarthSky.org: https://earthsky.org/astronomy-essentials/quadrantid-meteor-shower-before-dawn-in-early-january
The Quadrantid meteor shower is expected to peak on Saturday, January 3, 2015, as the new year's first meteor shower.
A former constellation named Quadrans Muralis (the Wall Quadrant, last used in the 19th century) is the origin for the Quadrantids. A wall quadrant was used in ancient times to measure angles in the sky before the telescope was invented.
It is predicted that the Quadrantid meteor shower will produce many meteors as they wiz across the night sky in the northern hemisphere. There is much less chance to see them in the southern hemisphere.
But, the peak of this meteor shower is much narrower than other meteor showers (only a few hours).
So, it you want to maximize your chances of seeing the most meteors, then you should be ready at around 0200 Greenwich Mean Time (GMT), or 9 p.m. Eastern Standard Time (EST).
Look toward the northern horizon, which is the location of the radiant of the Quadrantids (the location where the meteors to originate from). Later in the night, the radiant will rise higher in the northeastern portion of the night sky.
By nine hours after its peak, the radiant will be high in the eastern sky. However, by this time, the majority of meteors will have past.
For skygazers, the timing of the Quadrantids is sub-prime because the Moon is very near its full phase (waxing gibbous), so the light reflecting off the Moon will drown out some of the meteors.
However, the Moon will be high in the sky, away from the horizon where most of the meteors will be seen during its peak.
Looking before its peak, near dawn on the nights of January 3 or January 4, 2015, will be the best time to avoid the Moon, which will still be below the horizon.
Read 17906 times

More in this category: « Virgin Galactic's SpaceShipTwo crashes during a test flight SpaceX to launch CRS-5 on January 6, 2015 »
Share News tips for the iTWire Journalists? Your tip will be anonymous