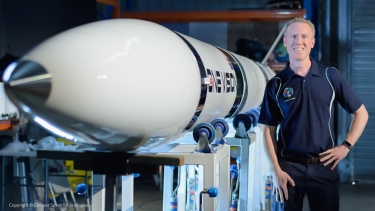 Gilmour Technologies' CEO & founder Adam Gilmour, a lifelong space fan who believes that rockets can be made "smaller, cheaper, faster".

Australia’s Department of Defence is collaborating with rocket company Gilmour Space Technologies on the development of new space technologies aimed at helping launch Australian rockets and satellites into space.

Under a newly announced agreement, Defence Science and Technology (DST) and Gilmour Space - a “homegrown” Gold Coast-based hybrid rocket launch provider - will work on areas of mutual interest, including propulsion, materials and avionics technologies for space.

The deal with DST will support Gilmour Space in the development of a new three-stage hybrid rocket that will launch small payloads and satellites into orbit from 2022.

The Federal Government says Gilmour Space is developing lower-cost, reliable and dedicated rockets to launch small satellites into low earth orbits - with the new partnership between Defence Science and Technology and Gilmour Space to research defence-related technologies including propulsion, materials and avionics technologies, to help develop a three-stage hybrid rocket that will launch small payloads and satellites.

Member for Fadden, Stuart Robert, said there is potential for more local work as a result of Defence’s strategic agreement with Gilmour Space.

“Gilmour Space Technologies hopes to leverage their work with Defence to undertake more onshore manufacturing of rocket systems and components which, with further investment, could create up to 50 additional jobs by the end of the year,” Robert said.