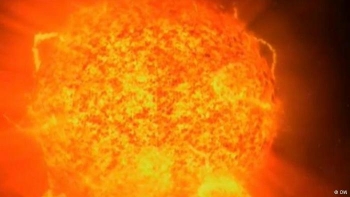 American global defence and aerospace firm Lockheed Martin has announced what could be a major breakthrough in the race to develop a power source based on nuclear fusion.

An internal team working as part of the company's top secret 'Skunk Works' development facility, said overnight it had developed a nuclear fusion device small enough to be used on aeroplanes, for example.

Project head Tom McGuire revealed that the company had been working on fusion energy in secret for around four years, while a prototype should be ready in five years and an operational reactor deployed within "as little as ten years."

Skunk Works has previously produced such innovations as the U-2 spy plane and the F-117 stealth fighter jet.

The potential for the invention is massive - Lockheed's fusion reactor would put mankind one step closer to finding an inexhaustible source of energy.

McGuire told Reuters the reactor would use deuterium-tritium fuel, which can generate nearly 10 million times more energy than the same amount of fossil fuel.

Nuclear fusion is the reaction that occurs when two or more atomic nuclei join together to form a new heavier element plus the release of energy — the process that occurs at the Sun's core. As a point of reference nuclear fission on the other hand refers to the splitting of atoms, which is generally used in conventional nuclear power plants.

Fusion power doesn't require the long-term storage of radioactive waste and has virtually unlimited usage potential as seawater can be used.

McGuire appeared in a YouTube video promoting te project, proclaiming if the aims of the project were realised, the “true atomic age can start”.

“The old adage about ‘Atoms for Peace’ was a noble one but ultimately flawed because the technology wasn’t right for it,” he said.

“We can achieve that grand vision and bring clean power to the world.

“Fifty years ago when people were super excited about nuclear power we tried to put it on everything, including planes. There were some big operational issues; it wasn’t safe.”

“Many of the approaches [to nuclear fusion] right now have significant drawbacks,” McGuire told reporters in a phone interview, adding some of those drawbacks include instability associated with the reaction, or scaling problems, which means the reactor needs to be very large in order for fusion to work.

“What’s different about our physics is it’s inherently small and stable,” McGuire told the Washington Post.

The Skunk Works Group’s first step is proving that its model works, he said, adding that eventually the company hopes that “instead of a construction project, we can make them in a factory."

“We’ve strategically chosen this time because of our technical progress and exposure to our patents pending,” a Lockheed spokeswoman said in an a statement.

“We are also looking for partners to work with us on the project, plus we think it is important for the public and decision makers to understand the real promise that compact fusion has for our nation and the world as a near-term solution to our energy needs.”

See the video below for more information from Lockheed Martin.