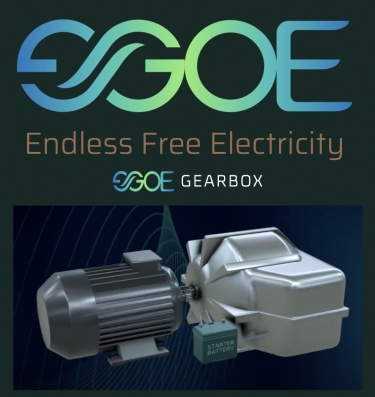 Australian entrepreneur, Aaron Pascoe, wants to revolutionise the world of power forever using the GGOE Mechanical Gearbox – and he is seeking partners to roll out the technology across the world.

Aaron's business is called GGOE, and he has created a ‘Mechanical Gearbox’ and developed blueprints for the adaption of the fuel-free power generating technology to all types of devices and machinery including residential dwellings, commercial buildings and factories, boats, cars, trucks, lawnmowers, and more.

Pascoe, the CEO and founder of GGOE, emphasises that the GGOE Gearbox is still ahead of its time, even though over 100 years ago Nikola Tesla invented the fuel-free turbine.

“The GGOE Mechanical Gearbox consists of a pair of motors, which is connected to the starter battery. The motors are powered by a starter battery to start the system and it generates thousands of Newton meters of torque. Using that torque, the connected turbine generates the power,” Pascoe explained.

“Because of its unique design, the GGOE Gearbox is a highly efficient self-starting prime mover that can connect to the turbine and generates and maintains its own momentum.

“We have already built our first prototype and we have secured an Australian Standard Patent. We are now ready to move into production mode and build commercially viable units which will be supplied to market and incorporated into products that consumers can use day to day, hence the need for partners across the globe.

But what about fusion technology, from companies like Commonwealth Fusion Systems?

Even more promising in the fusion space is Avalanche Energy which has just come out of stealth, and its device is shoebox sized.

As Jeff Brown from Brownstone Research said on the Glenn Beck program podcast, in the third hour, from the 16th of June, 2022 - "They are building... a fusion reactor... their device is roughly the size of a large shoebox... their approach to the fusion reactor is very different. Rather than the temperature of the sun to create this fusion reaction or extremely high pressures to fuse ions, they're taking an interesting approach in trapping ions in orbit and using very high voltage to create the plasma reaction. In theory 600,000 volts will maintain this plasma reaction, fuse the ions and release this clean energy, no radioactive waste of any kind. What's interesting about this is that something the size of a shoebox could actually be used as the source of energy for a car, a semi-trailer, for a cargo ship and even for an aircraft."

Brown said: "They just came out of stealth a few weeks ago, very promising technology, looks good on paper in terms theory, they're working on some prototypes, the most challenging thing they need to overcome is really how to manage this 600,000 volts reaction inside of these small devices. No easy challenge but it can be done, I can see how it can be done, which is why its such a promising company and so I think this is great kind of complement to these compact nuclear fusion reactors which would fuel municipalities, cities, large neighbourhoods, casinos and then this would be small enough to fuel a small group of homes or a semi-trailer or even an aircraft which is a really exciting possibility."

Glenn asks how many watts this would generate, Brown says: "an easy analog, 600,000 volts, compare that to the voltage in your car battery, that's about 13 volts, there's a big gap between the two, it's not insurmountable."

Sounds to me like Aaron needs to contact Jeff Brown from Brownstone Research, for the GGOE Gearbox sounds much simpler.

Pascoe continues: “We believe we will fundamentally change the way power is generated across the world

“Power will be generated for free, anywhere anytime, thanks to this extraordinary technology. The only cost will involve the maintenance of the technology.

“GGOE Gearbox units will be available for installation in homes and other buildings. We will work with vehicle, appliance and other machinery manufacturers to incorporate the technology into their products so people can power them at virtually no cost.

“Yes, we are talking about getting rid of the need for fuel. The only competitor that GGOE Gearbox has is solar, but solar relies on the weather. The GGOE Gearbox relies on creating a large amount of torque in creating power generator, 24 hours a day, seven days a week, churning endlessly and creating zero emissions.”

So, what about Nikola Tesla’s Free Energy Dream?

Not many people are aware, but Nikola Tesla actually invented one of the world’s most efficient and fuel-free turbine engines in the early 1900s. The Tesla turbine, as it is known, is a bladeless centripetal flow turbine patented by Tesla in 1913.

According to GGOE, the Tesla turbine is an extraordinary piece of engineering that has been deliberately forgotten because it doesn’t require fuel. No fuel – no money for the big oil and fuel companies.

Nikola Tesla’s dream was to create a source of inexhaustible clean energy that was free for everyone.

“We have created the GGOE Gearbox, the first step to completing Nikola tesla’s dream of free energy,” Pascoe said.

Pascoe continues: “We are about to revolutionise energy in a very powerful and real way, providing people, businesses and organisations across the globe with the ability to utilise the GGOE Gearbox to generate free electricity.

“Imagine being able to jump in your car and drive to the shops without having to get fuel or worry about charging it? Or being able to mow the lawn using a lawnmower that starts at the push of a button and keeps going without need for fuel or batteries. That’s what we are talking about.”

GGOE is an Australian company based in Perth that has developed a fit-for-purpose version of a mechanical gearbox for everyday use across the world.

More in this category: « How energy companies can leverage DataOps to comply with the CDR Telstra taking registrations of interest for Telstra Energy »
Share News tips for the iTWire Journalists? Your tip will be anonymous