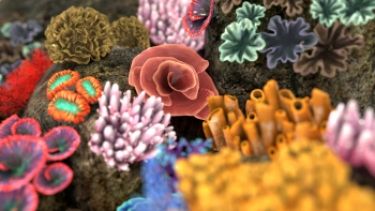 A close-up of an image from the app. Supplied

The Australian arm of Chinese smartphone maker OPPO has donated $52,000 to help in restoration efforts for the Great Barrier Reef.

In a statement, the company said this contribution had been made through a partnership with The Reef Restoration Foundation that was established in March.

The company developed an AR mobile app, called Recolour The Reef, to showcase the wonders of the reef and for each download, it donated $1 to the foundation.

In April, OPPO donated $50 from every sale of a Find X3 Pro smartphone to the foundation for "adopting" a piece of coral within the foundation's coral nurseries.

A number of phones from the Find X3 line had been donated for the foundation to use as social media giveaways for promotion of information about the reef.

OPPO Australia managing director Michael Tran said: "It's of high importance to us at OPPO that we are practising and exercising our corporate social responsibility and doing what we can to help ensure the future of our natural wonders.

"The Great Barrier Reef is part of each Australian's national identity and we're proud to be engaged in a long-term partnership with a foundation such as RRF that has established the country's first offshore coral nursery."

Foundation chief executive Ryan Donnelly said: "The extent of the partnership with OPPO Australia has positioned us for further growth, as opposed to having our time consumed with resourcing.

"It has allowed us to focus on our research and development capability and the future, including being able to expand our program to other sites where we already have permits such as Hastings Reef and Moore Reef.

"The fact that OPPO wants to use its market power to drive home a message of getting involved with the community and the community's aspirations, has significant power in its own right.

"OPPO recognises that technology is their core business and they want to make a difference to the world around them, so they partner with those whose core business is just that. We all have a role to play."

More in this category: « ACT Government selects Brighte to deliver Sustainable Household Scheme Lenovo commits to greener and sustainable initiatives »
Share News tips for the iTWire Journalists? Your tip will be anonymous