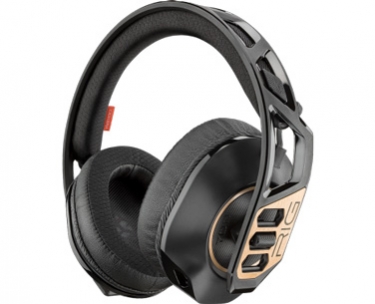 One of the least talked about issues with headphones is the weight. The RIG 700 HDs weigh just 241g. What been sacrificed to get this low?

On paper, not a lot. The 40mm drivers, 32-ohm impedance and 20-to-20,000Hz frequency response are comparable with most competitors on the market. Battery-life takes the biggest hit; it’s only 12-hours. While this might sound ample, the power button is used for power and connectivity and we frequently left it turned on as pressing it always meant a short check to see whether it had actually entered the state that we’d set it to. This meant that it drained quickly and was frequently dead when we went to use it. However, it will work when plugged in with a mini-USB charging cable.

Adjustability is also reduced: the cans have three holes that they clip into to adjust the size. If your head is an in-between size, they won’t be totally comfortable.

The design looks very industrial and metal, but it’s actually very plasticy. We’re not sure that looking metal and feeling plastic exudes a sense of quality but we’re not too fussed when these weigh 140g less than the 370g Alienware 510H 7.1 Gaming Headset.

The RIG 700 HD controller box connects via USB Type-A to the PC but there’s an additional optical cable port (an optical cable is included) you can use for top-quality audio – it supports Windows Sonic Surround.

While other premium headsets sound meatier, the RIG 700 HD still provides plenty of crisp, clear, lag free, very accurate, directional audio that assists well on the battlefield. Music can sound good too but there’s not much bass compared with competitors.

One major area that we were impressed with was the noise-cancelling microphone. A poor microphone can be infuriating as your teammates (or conference call colleagues) will instantly get frustrated if they can’t hear you properly. But, here’s where you’d expect Plantronics/Polycom/Poly/whatever-they’re-calling-themselves-today to excel, thanks to their business-grade phone heritage. There’s even a slider which allows you to mix audio levels between PC output and the microphone so that you can hear what your teammates hear from you.

As such, the RIG 700 HD will prove incredibly popular with certain sectors of the market. We still prefer the Razer Thresher 7.1 all-round performance and comfort, but they weigh almost double (400g). These feel more like high-performance earmuffs.

At $200 they’re not cheap, but they’re a great lightweight alternative to the best on the market.

Nick Ross is a veteran technology journalist who has contributed to many of Australia's top technology titles and edited several of them. He was also the launch editor of the ABC's Technology section. He now spends his time being a journalist, editor, publisher, media commentator, digital marketer, producer, copywriter, corporate host and media consultant, to various degrees. He covers all things business and technology including IoT, cybersecurity, UC and the professional Audio/Visual space: from consumer to B2B and Enterprise.