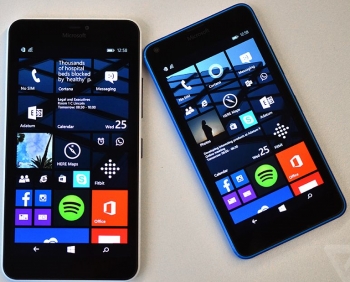 The Lumia (Microsoft Devices) 640XL is a damned big smart phone that at A$399, has enormous appeal to consumer and corporate users.

The 640 XL (6 series) sits above the entry level 4 and 5 series yet in many respects punches way over its weight being the logical replacement to the 6” Lumia 1320 released earlier in 2014.

I have previously written about the 5” 640 and the larger 5.7” 640XL and will not repeat the specifications again. Suffice to say that the XL is a very competent smartphone with a 13MP camera at a price about 70% less than an iPhone 6 Plus. I do not mean to draw comparisons between the two except to say that Microsoft will sell a truckload of the 640 XLs because the price for the specifications on offer is amazing.

I loaned the 640 XL to a Windows Phone user who was utterly familiar with the Metro Tiled interface and frankly is not interested in going back to “the mess [cesspool] that is Android.” His comments were that the phone was a little big for his pocket but otherwise did everything he wanted. He particularly liked the 13MP, f/2.0 camera as well as the ‘glance screen’ that continuously shows the time on the screen at about 10% brightness.

I loaned it to an Irish iPhone user and to my absolute surprise, he was in raptures over it. “I tried really hard not to like this phone because I am an Apple fan boy - but failed. It does all I want and I love the screen size and the price is fecking amazing. The only app I could not find was for ANZ banking but its mobile landing site worked fine for me,” he said.

The Windows Phone user was however a little more forthcoming in his comments about the ecosystem.

“I think a good analogy is professional photographers. Almost all pros use either the Canon or the Nikon system (e.g. iOS or Android ecosystems) and are locked into whatever system they chose because most cannot afford to change. I am a Canon user and when Nikon brings out a new pro camera that is heaps better than what I have I cannot switch. When I buy a new model, my number one camera becomes the backup and that needs to be the same system as my lenses. I probably have $15K to $20K invested in lenses and another couple of thousand dollars in flash units and cables – all would need replacement. All I can do is wait six months until Canon catches up.”

That rather long-winded explanation applies to apps, music, movies, eBooks, smartwatches and more that users have invested in their ecosystem of choice. Regardless how good Windows 10 Mobile is the desertion rate from dyed in the wool iOS or Android users will be low and slow unless Windows offers a superior experience and something unique that is not part of the iOS or Android system.

It does! Universal apps are enticing especially as these should be also available on Android or iOS. What will power sales for Windows 10 phones is corporate use (value), ease of integration (if you use Windows/Office at work) and security (it will be way ahead of other OS in corporate use).

Now to the review.

Front camera: 5MP HD, F/2.4 was adequate for selfies and video calling (up to HD resolution). Lumia’s selfie app makes it easy to capture the perfect picture, automatically enhanced and ready to share. You can use a Treasure Tag accessory as a remote shutter in Lumia Selfie. You can also fine-tune your selfie’s appearance and apply high-quality effects.

You have to remember that the Lumia Camera app is the best ‘pro’ camera app and allows for a huge range of customisation to get the ‘just right’ picture – auto mode is fine for happy snaps.

Security: I thought it wise to show the extent of security built in.

Frankly, no other OS or handset has the full suite above.

Apps: Yes, Windows Phone has an Achilles heel until universal apps for Windows 10 Mobile take over. At that time Android and iOS apps will flood over to Windows courtesy of a developers ‘bridge’ Microsoft has made available. The bridge allows iOS and Android developers to compile for Windows 10 using their native code - I think the ‘billion devices’ from phone to desktop will be a compelling market.

In the interim you have Office 365 personal – a full license (that can be used on any Windows device) plus:

Sensors/etc: The Wi-Fi N acts as a hotspot for up to 8 devices. It has Bluetooth 4.0, NFC, DLNA, Screen projection and peer-to-peer sharing.

Opinion: I use a Lumia 930 as my every day phone. There is little it does better than the 604XL. At A$399 (shop around) with amazing LTE band coverage and full Windows 10 compatibility this is a phone that you need to look at. It is a great phablet device.

More in this category: « Why you should not buy a OnePlus One mobile TomTom GO 6100 in-car GPS - review »
Share News tips for the iTWire Journalists? Your tip will be anonymous