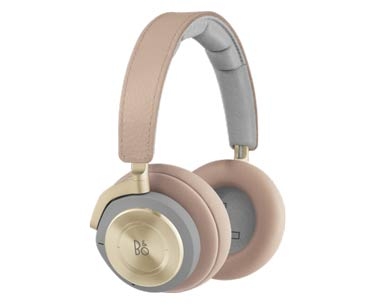 Bang & Olufsen’s Beoplay noise-cancelling, wireless headphones have been a company flagship for some years now. The latest ‘H9’ refresh sees battery-life pushed up to 25 hours, Google Assistant built in plus boosted bass performance.

At 285g they’re relatively light for powerful and sturdy headphones. That’s largely thanks to the polished, anodised aluminium body. They’re very comfortable thanks to the lambskin-encased memory foam pads which will contain all but the biggest ears. One of the best things about these premium headphones is that, while the lambskin will degrade over time, it will look seasoned and worn without messily-disintegrating like cheap, leatherette competitors.

Controls are all touch based on the exposed-metal side and generally work well. A quick swipe up and down can turn noise cancelling on or off or even quickly switch into “Transparency Mode” where you can hear someone talking to you (it’s not fully transparent but it’s fast-acting and functional). The only thing we couldn’t get our head round was the volume-adjustment gesture – we ended up resorting to our phone for that.

Tapping the Google Assistant button was responsive and unexpectedly useful, although we did knock it accidentally a few times.

The battery life generally lived up to the 25-hour promise although it felt a little less than that sometimes. However, if the battery does go then the included 3.5mm audio cable can rescue you – assuming that your device supports it.

At $840 they’re crazy expensive, but that’s the B&O cachet for you. Eagle-eyed buyers will find the previous versions for less-than half that which eschew a few features for similar audio performance. Elsewhere, Bowers & Wilkins PX7’s also offer superlative audio performance but for $250 less and may suit you better if you want something lower key because you’re not keen on B&O’s Peony-and-Chestnut-based style statements. Either way, we love them and if money is no object, they’re well worth a look.

Active noise cancellation
Features hybrid Active Noise Cancellation (ANC) technology. Two microphones, one placed on the outside of the ear cushion and one placed on the inside, just in front of the speaker, turn the surrounding noise around – effectively cancelling out unwanted elements.