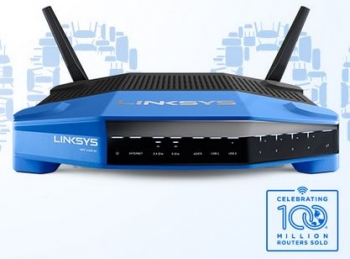 Apartment and small home dwellers have a perfect, more affordable solution, for smaller spaces – and it looks like a Blue and Black Linksys of old – only sexier.

First let me say that I have been spoilt using an EA8500, AC2600 router from Linksys so I kept putting off this review.

I was pleasantly surprised at how admirably a A$294 router (if you shop around you can save 20% or so) can perform and for anyone except petrol heads would be the ideal apartment router.

Its technology comes from the ‘old Linksys’ or Cisco and builds on the Open Source, OpenWRT, Linux based operating system so you can customise it if you have the know-how (for example load a VPN).

So let’s get on with the review.

If you have just read the EA8500 AC2600 review my apologies for repeating the test rig.

The modem was plugged in and connected via its WAN port to a Telstra Cable Gateway that is rated at 100Mbps but can go up to 135Mbps – lucky me. It is also compatible with ADSL, ASDSL2, and ADSL2+.

That brings me to a pertinent point – the router will only transmit Wi-Fi nearly as fast as your internet connection – but wait until you see the results the further you get away from the router.

I used Ookla SpeedTest connecting to Telstra Sydney servers. The test device was a Samsung Galaxy S (last year’s model) with Wi-Fi AC, dual band 2.4Ghz and 5GHz, and MIMO capable. It has features not used by this router nevertheless it is my consistent test device. I also tested against the N600 Telstra Gateway router as a control device.

The router presents four SSID – a secured 2.4GHz and a 5GHz band, and a 2.4Ghz and 5GHz ‘guest’ band that allows you to give them a password and keeps them off your network.

If you have a dual band device – as modern smartphones and tablets have, then use 5GHz. If you have an older device or Internet of Things (IoT) that only support 2.4Ghz connect to that.

For your convenience I will put the AC2600 speeds in brackets – remember that router costs $449.

What this shows is a strong 5GHz signal (as expected) but this falls away with distance (expected without all that go fast stuff). These are still very credible figures when compared to the N600 router used as a control.

A router, 2x antenna, 12V, 2.5A power supply, flat Ethernet cable, CD and Quickset up guide. You should then go to its setup site and check for firmware updates and you are away.

Looks wise it’s a very modern take on the traditional Linksys blue and black – a little squatter, raked lines and looking ‘ready to run’. It is ‘loud’ compared to the subtlety of the AC2600 but will look good in most modern apartments. 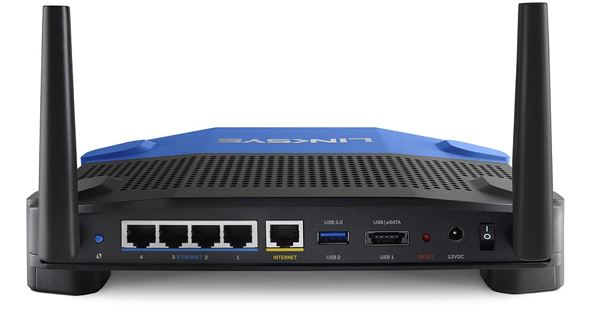 It will encourage you to get a Linksys Smart Wi-Fi account.

Router management has transitioned to the Linksys Smart Wi-Fi Account, an intelligent software platform for the next generation of home networking. It has:

Comparisons are difficult especially as I have not reviewed an AC1200 before – I tend to go straight for the top!

I think there is a place for the WRT especially as an open source router as it has few competitors.

However, Linksys also make an AC1200 smart, dual band router at $249 (pictured below) – about the same price as Belkin’s own AC1200, and Netgear’s AC1200 router has similar features. These however are as much as $50 more than D-Link or TP-Link offerings that are at present the market leaders. 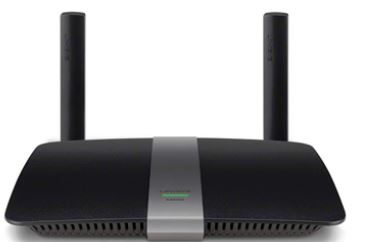 So I would probably buy the Smart Wi-Fi and leave this to the enthusiasts who remember the old WRT series.

I can say that under Belkin’s ownership and stewardship this represents a new wave of excellent routers that will help the iconic Linksys name to increase market share.