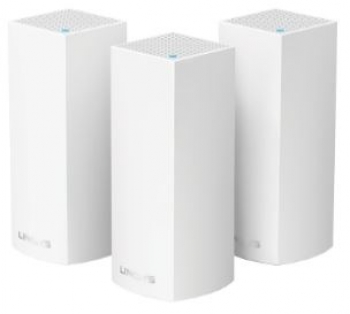 Linksys has released Velop to envelop the whole-of-home Wi-Fi issue – it claims to be the first AC tri-band modular Wi-Fi system that can be installed in a mesh configuration to provide 100% speed to the edge of the network.

The Velop comes in single, double and three packs to cover up to 560 square metres. Mesh effectively means that you place one unit at the Internet connection point, the second on say, another level in the home and the third elsewhere. While the Mesh concept seems like a range extender it is not – each unit communicates with each other via Wi-Fi or wired Ethernet and calculates the best way to deliver the Wi-Fi signal using one SSID (service set identifier network name).

With a traditional router and range extender combinations, the Wi-Fi speed is cut in half with each “hop” from one access point to the next, resulting in users receiving only a fraction of their broadband Internet speed at the edge of the network.

Chet Pipkin, founder and chief executive of Belkin International, said, “This is the reason I purchased Linksys in 2013.  I had a vision of solving a huge problem in almost everyone’s life, slow and unreliable Wi-Fi. Linksys has always been pioneers in home networking and I knew this was the team that could innovate and deliver the ultimate Wi-Fi experience.  Velop is a union of performance, design, and ease-of-use and provides what everyone wants – seamless, reliable Wi-Fi.  Linksys has set the bar for true mesh networking systems.”

Each node is configured during set-up via the Linksys app leveraging Bluetooth to securely communicate between the mobile device and each node.  After set-up is complete, the Linksys app serves as a Wi-Fi management tool.

Velop uses the three radios dynamically to determine the optimal path from the modem and “parent” node to each “child” node to ensure the fastest speeds to all client devices. Dynamic channel scanning algorithms evaluate the wireless environment to select the best band (either 2.4 GHz or one of the two 5 GHz radios onboard) as well as the channels within each band to improve performance between nodes and client devices.

Each node is a small tower standing just 18cms in height, with a footprint 88% smaller than the average router. The vertical orientation also has performance benefits, with the six antennas placed at the top and middle of the unit, some pushing signal up and down and others pushing signal left and right.

This improves Velop Wi-Fi performance in both single storey and multi-storey homes. To eliminate cable clutter, the base of the design features a cavity where power and Ethernet ports are hidden and a small notch with rubber tabs to organise cables in a clean and tidy manner. 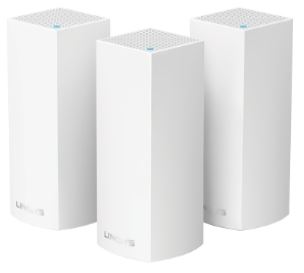