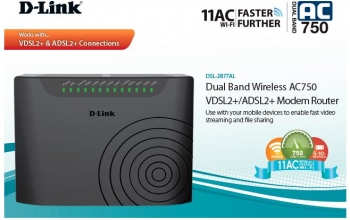 It is NBN FTTN, VDSL2, ADSL2+ and WAN ready and has sufficient performance for apartment dwellers. It also has a USB powered range extender.

The Dual Band Wireless AC750 (DSL-2877AL) is the slowest category of AC routers I have tested. I am spoilt with Telstra Cable speeds of 100Mbps or more and an AC2600 MU, MIMO, super router.

Bottom line - before you read on - is that this router works perfectly well delivering almost 100% of the internet speed at line of sight distances up to 10, or even 15 meters. My recommendation is to use it in smaller apartments where everything is on the same level and you can place the router somewhere near the mid-point.

The 5GHz signal is strongest and if you have devices that support that (most of the latter smartphones, tablets, Windows notebooks and Macs do) then this device is a low cost option at A$179.95.

Now to the review – if you want a good low cost router read on.

Let’s start with the tests. The modem was plugged into power and connected via its WAN port to a Telstra Cable Gateway that is rated at 100Mbps but can go up to 135Mbps – lucky me. It is also compatible with NBN FTTN as it supports VDSL2, and ASDSL2/+.

That brings me to a pertinent point – the router will only transmit Wi-Fi nearly as fast as your internet connection – but wait until you see the results the further you get away from the router.

I used Ookla SpeedTest connecting to Telstra Sydney servers. The test device was a Samsung Galaxy S (last year’s model) with Wi-Fi AC, dual band 2.4Ghz and 5GHz, and MIMO capable. In other words, it is a good match for the router. I also tested against the N600 Telstra Gateway router as a control device.

The router presents two SSID – a secured 2.4GHz and a 5GHz band. If you have a dual band device – as modern smartphones and tablets have, then use 5GHz. If you have an older device or Internet of Things (IoT) that only support 2.4Ghz connect to that.

It will stream HD video to my tablet at up to 20 metres.

What this indicates is that its processor and internal aerials (no protruding aerials) are best at close range up to 15M line of sight. The speed variances happen because of the lower CPU/output power and variances in the internet over the three tests run at different times.

AC750 is a combination of N300 2.4GHZ (300Mbps) and AC433 5GHz (433Mbps). As such the USB N300 (DMG-112A) repeater can only extend the strongest 2.4GHz signal at that location. It would be best used to fill in a dead spot in the home. It makes no difference to the 5GHz signal. AutoZone technology seamlessly moves your devices between the strongest Wi-Fi signal available.

The other issue is that it must be plugged into a USB charger (not supplied) that outputs at least 1A. Older USB2.0 is 500mA.

The box contains the router, power supply, an ADSL line splitter, phone cable, Ethernet cable, the N300 USB range extender and basic quick start guides. The promotion with the range extender is for a limited time.

The router is not initially password protected – you can log into 2.4 or 5GHz channels immediately and the router login/password is the standard admin/admin – so change these quickly.

It is best to load D-Link’s OneTouch app (iOS or Android) to update the firmware and automatically set up the router with passwords – don’t leave Wi-Fi or the router unsecured. You can use a browser too as it has an inbuilt HTML web server – it is the standard D-Link interface.

It is subtly attractive with a matt black finish, an inbuilt vertical stand, no antennas, and a row of flashing lights across the top. If placed in the lounge room, you may want to hide it as the lights are quite bright at night. 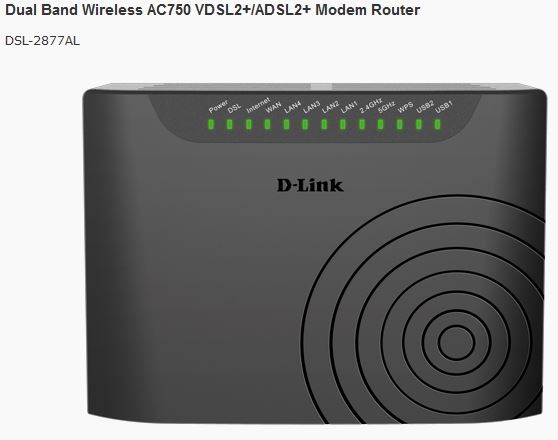 It is a pretty standard dual band router. Its operating system, is under GNU General Public License (GPL) – favoured by the Linux community as it can be modified.

Optionally you can plug a USB 4G dongle into the unit for fall-over if the WAN/ADSL goes down. This may also be useful for rural users without a WAN/ADSL connection.

Its software supports the normal set of IPv4/v6 network services, VPNs including PPTP, L2TP, Parental controls, and more. It has a firewall and basic attack prevention. It will support a separate guest network and has WPS protected setup (push buttons to connect). There is a 112 page manual on-line that will tell you all about it. 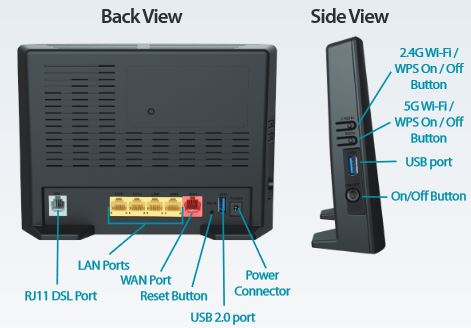 D-Link was pretty 'game' to send me this AC750 router – it is really one of the lower speed AC categories – then again I have reviewed N300 and N600 in the past and made similar claims.

If you are the right user – I repeat within a 10-15 metre, line of sight, radius - then at $179.95 this bundle is exclusively available at JB Hi-Fi for a limited time. You can get the router only at Australian computer shops for less. It is a good router.

Pros: It is a capable dual band AC750 router that does what it promises at a (very) low cost. NBN/VDSL capable (few in this price bracket are so it is at least future proof). The USB N300 range extender may be useful in certain circumstances.

Cons: Would have preferred USB 3.0 ports and Gigabit Ethernet ports but at the price who can complain.