GlobalData: Mobile communications services revenue in Asia Pacific to hit US$398.4 billion in 2026 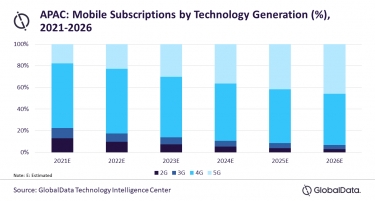 Mobile communications services revenue in Asia Pacific is poised to grow at a CAGR of 4.4% from US$320 billion in 2021 to US$398.4 billion in 2026, forecasts data and analytics company GlobalData.

Growth is attributed to the mobile data segment, supported by the availability and adoption of 5G services in several countries.

GlobalData’s analysis reveals that mobile data services will remain the largest revenue contributing segment in the region driven by expansion and adoption of high-ARPU 5G services in the region.

“With 5G services already available in most countries like China, Japan, Australia, Hong Kong, and Korea, and set to be launched soon in countries like India, Vietnam, and Bangladesh, the revenue prospect for mobile data segment will remain strong throughout the forecast period. Operators like Jio and Airtel in India, and Viettel, VinaPhone, and Mobifone in Vietnam, for instance, conducted 5G network trails in major cities in their respective countries and are gearing up for 5G service roll out by year end,” notes GlobalData telecom analyst Hrushikesh Mahananda.

Government is also pushing for policies that support initiatives such as the public sector investment in 5G applications, favourable tax incentives and deductions, forums for industry-government collaboration, promotion of 5G led-technological innovations and license arrangements to enhance spectrum use and reuse.

China is the largest 5G market in the world with an estimated 778 million 5G subscriptions in 2021, projected to increase to 1.8 billion by the end of 2026, primarily driven by the telco investments and the regulator’s efforts to expand the 5G network and boost 5G adoption.

“APAC has become the centre of a technological race for 5G+ supremacy. South Korea, Japan, and China have gone beyond just the deployment of 5G to the development of the wider 5G ecosystem. This also means supporting the vast electronics manufacturing and ICT industries in these countries,” Mahananda adds.

In China, for instance, telecom regulator MIIT released a plan in March 2021 to develop industrial internet from 2021 to 2023, overseeing the construction of 30 fully connected 5G facilities in 10 key industries by 2023 along with the development of fusion applications such as intelligent manufacturing, network-based collaboration, personalised customisation, and development of technologically innovative enterprises.

“While mobile data segment will continue with the growth trajectory, mobile voice service revenue will decline at a CAGR of 4.2% over the forecast period, as consumers will continue to migrate towards OTT/internet-based communication services,” Mahananda concludes.

This first appeared in the subscription newsletter CommsWire on 29 March 2022.

More in this category: « Astell&Kern fuse a high-end headphone amplifier and DAP in the portable Acro CA1000 Review: OPPO A76 another sturdy offering from a dependable brand »
Share News tips for the iTWire Journalists? Your tip will be anonymous