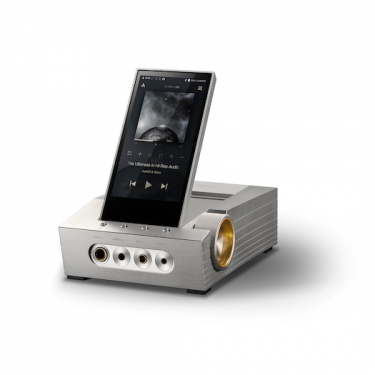 The Astell&Kern Acro CA1000 Desktop Amplifier and DAC is a remarkable combination of a high-end amplifier and digital audio player, or DAP, all in one super-portable and stylish unit.

If you know your audio devices, you'll know a digital audio player stores and plays a rich suite of high-resolution, or lossless, music and media files, across many digital formats, resolutions and encodings. One such well-known lossless format is FLAC, while most music played on mobile phones, even desktop and laptop computers, are compressed audio formats that are, by nature, lossy - that is, to achieve a smaller file size some of the audio is removed, some is flattened, and other audio alterations are made. MP3 is a major example, as well as AAC and Ogg Vorbis. For the audio purist lossy audio compression won’t do. By playing lossless audio formats the listener receives every nuance, high, mid, low, and all other details that existed in the original uncompressed files.

It supports WAV, FLAC, WMA, MP3, OGG, APE, AAC, ALAC, AIFF, DFF, DSF, and MQA audio formats which it plays through four ESS ES9068AS digital to analogue converters, or DACs. That’s right; not one but four - Astell&Kern have made no compromises in their relentless pursuit of audio purity. The device has separate 2.5mm, 3.5mm, 4.4mm, and 6.35mm output circuits and these are physically separated to ensure there is no possibility of noise interference between the signals from each output stage.

There are plentiful options for audio in and out, with a stereo pair of RCA sockets for analogue input, another for analogue output, along with digital inputs of coaxial, optical, and USB-C, and digital outputs of optical and USB-C. It also supports 802.11 a/b/g/n/ac Wi-Fi on both 2.4GHz and 5GHz, Bluetooth v5.0 with A2DP, AVRCP, Qualcomm aptX HD, and LDAC profiles, as well as on-board 256GB file storage that can be expanded by up to another 1TB via microSD. And, of course, there are the four separate headphone outputs mentioned above. This all combines to provide flexible options for audio input and output, and you can also store music locally through the microSD card, via USB-C, or even FTP over Wi-Fi. If that’s not enough, you can even manage CD ripping too.

Poking around the local storage revealed the 71-page PDF user manual in English and other languages, which you can also find at the Astell&Kern website under Support/Download.

There’s an Android-based player built-in with a 4.1” 720x1280 touchscreen that allows you to control all your music sources and outputs and file library, as well as install apps like Apple Music, Spotify, and Tidal giving even more options. Being Android you simply swipe down from the top to turn Wi-Fi and Bluetooth on and off, change brightness, view your downloads, access other settings, and so on. The screen can lay flat and also rise up to 60 degrees.

iTWire could list specs but that only tells part of the story. The Acro CA1000 truly must be heard to be believed. You can look at a traditional amplifier and believe it’s powerful, but in this case, we’re talking about something no bigger than, say, three mobile phones stacked on top of each other. Yet, it’s stunning. iTWire uploaded FLAC copies of the Pink Floyd collection to internal storage and played it through a 3.5mm wired headset, running from battery.

We did not anticipate what happened next; it was a goosebump-inducing experience hearing Another Brick in the Wall as if it were the first time all over again. Each instrument and voice was crisp and clear, moving through the nuances of the long, subdued guitar solo hit, onto the band’s leveraging their instruments to indicate rising menace, all cocooned amidst a mixture of tempos, disco beats, and children’s choir. The experience was immersive, but more than this it was a journey transforming me from my chair and surroundings to a world of fantasy and enjoyment, through the authenticity of music being heard as the artist intended.

If you prefer, you can also customise the audio with AMP settings that focus on low gains, mids, and highs, as well as a ‘super’ option. You can adjust crossfeed and EQ, creating and saving numerous EQ mixes to suit your preferences. You can select different DAC filters, and amongst these options, the device strives to protect your hearing with an optional volume limit warning and a set of related options.

The Astell&Kern Acro CA1000 sets new standards for headphone amplifiers, with a feature set and quality not previously seen on a headset amplifier. The gain setting circuitry can drive almost any existing headphones to an optimal state without degraded sound quality, and it offers inputs and outputs that can be used by anyone from a general audience to audio enthusiasts. It can be used as a Hi-Fi audio system through its range of connectivity options, all driven by the touch-screen. You can also take it wherever you want, bringing premium sound anywhere you are. Ordinarily, you would not expect to find the features and options stuffed within the CA1000 on anything smaller than a stationary amplifier. Yet, the CA1000 is small, portable, and includes an 8,400mAh battery for completely wireless operation. It offers continuous playback of more than 10 hours, and charges via USB-C, supporting USB-PD 2.0 fast charging that takes its battery up to 50% in one hour, and then fully charged within two and a half hours.

All this comes bundled in a premium-looking moon-silver aluminium casing with silver-plated shield cans inside to eliminate electromagnetic interference between all the many parts.

There is so much more to say; Astell&Kern has set out to not only create a high-end portable amplifier and DAP in one device but to absolutely set a precedent of the highest level. The range of connectivity options and the range of features provide you with no shortage of flexibility, mixed with uncompromising engineering and audio excellence that maximises clarity while eliminating interference.

See it for yourself here:

More in this category: « The GME MT610G personal locator beacon keeps you safe in the great outdoors with your own search and rescue team GlobalData: Mobile communications services revenue in Asia Pacific to hit US$398.4 billion in 2026 »
Share News tips for the iTWire Journalists? Your tip will be anonymous