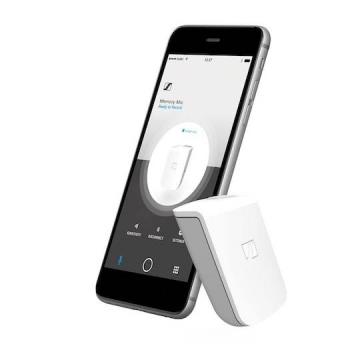 German audio company Sennheiser has released a portable microphone for smartphone recording, either by itself or paired with video. Here’s how it performs.

The Sennheiser Memory Mic retails for $319 and is aimed at a “prosumer” audience – business people, journalists, content creators, performers and the like.

It’s a small, solid unit — some say bulky, but your mileage will vary based on your own size; I didn’t have any concerns about it — with four hours of onboard recording capacity.

The unit connects to your smartphone through a dedicated Sennheiser app to download audio, as well as manage various settings, including firmware upgrades.

Curiously, there isn’t any record button on the microphone itself, meaning you cannot make a recording without kicking it off from the app.

Interestingly, Sennheiser also says the microphone has family-oriented use cases, such as recording your children’s voice when performing in a school play. This I find slightly dubious, in that you need to ensure the unit and the smartphone app are paired and communicating if you want to record both video and audio concurrently – the video is handled by your phone, and the audio by the Memory Mic. To me, this seems difficult and awkward to co-ordinate with one person seated and one person on stage. Nevertheless, it’s something with which to experiment.

While using the Sennheiser Memory Mic, I found the recording quality excellent and clear. As with all things Sennheiser, it’s clearly engineered by audio experts, and it’s what you’d expect from the brand, and especially at the price.

However, one thing I find curious is, while the device uses Bluetooth you never actually pair it to your phone, at least not in any persistent way like you do with headphones or your car. You don’t go into Settings and Bluetooth and pair it; instead, you use the app to locate and connect to the Memory Mic each and every time you wish to use it, including to download the audio.

It also uses Wi-Fi – and let this be an eye-opener on how well other publications review products, because I did not find any other review mention Wi-Fi. Specifically, in my testing, it seems the Memory Mic will download your audio via Bluetooth up to a certain size limit, then Wi-Fi has to be used for larger content. This stands to reason; Bluetooth isn’t as fast (which is why, for example, Apple Watch updates take a long time).

Again, this is handled by the app. It will disconnect you from any Wi-Fi network you are on, connect temporarily to the Memory Mic’s Wi-Fi network, download your audio, then disconnect again.

I mention these mechanisms more out of interest and curiosity than to indicate any problem. It worked fine, and the app both downloaded my audio recordings and synchronised my audio recordings with video captured on the phone. I could then save the resulting files to my camera roll, export to other applications or upload to DropBox or other sites.

However, what I might like to see on the next-generation of the product is a way to download audio via USB and to kick off audio recording on the device itself. Speaking of USB, the package comes with a USB-C cable for charging.

Ultimately, it’s a quality product, and it does what it says it will, to Sennheiser levels of audio excellence.

More in this category: « REVIEW: Brush up on your Father's Day gift with an app-connected Oral-B Genius toothbrush MUST-SEE keynote: Huawei's new P30 Pro, arguably the best Android smartphone with world's best cameras »
Share News tips for the iTWire Journalists? Your tip will be anonymous