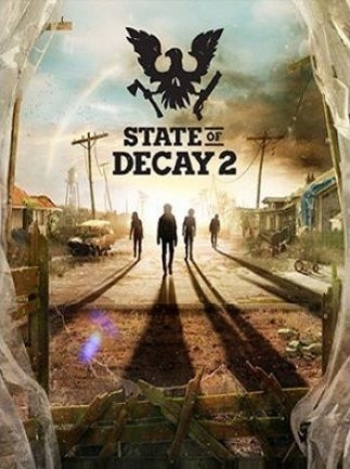 Surviving the zombie apocalypse is a significant amount of work at times, and you will surprisingly need the management skills you have built up. Oh, and the ability to dismember limbs with a machete.

There is a popular hobby board game known as Dead Of Winter, a game that could only be realised as board game due to the player interactions that really need to have you read the faces of your fellow players.

It is a co-op game of building up a colony of survivors, scavenging for useful equipment and consumables and deal with all of the tribulations of a hostile, zombie infested world outside. There are also human relationships, both within and from outside of the fledgling community. However, there is the human element of a possible betrayer amongst the group, somebody with a hidden agenda, that is opposed to the rest of the group, trying to make a new start post-apocalypse.

State of Decay 2 takes the situation of the original game and builds upon it, adding refinement and, while remaining dense in nature, with lots of moving parts, is accessible enough to new players looking for, well, The Sims done in a more violent horrific world.

Players pick a couple of “starting” survivors and find a suitable location for the first colony, hopefully recruiting some others along the way.

But this is a needs-based economy. Getting a successfully protected and somewhat self-sufficient community up and running takes a broad skill-set; this means occasional hard decisions need to be made, and some people may not be welcomed in, meaning enemies will be made beyond the undead.

The early game is all about scavenging, locating useful spots to use as outposts, building influence with your colonists by mowing down the undead (either shooting, belting with a wielded implement, or most satisfyingly, running down in a car) or completing quests of various kinds and generally preparing your base for protection, survival and the continuation of the community.

Each colonist has a set of skills, and it is this mix of skills that will determine just how desperate things will get at times. Not having a gardener will make it trying when feeding the colony, but having too many gardeners will mean that, despite the full bellies, it will be hard to fight off an attacking horde of zombies.

There is a lot going on here, but at times playing State of Decay 2 can feel a little like a chore. Because it parallels concepts in The Sims where players need to “care” for the characters, and where they live as equally as they do about destroying the undead, it is hard to pigeon hole the audience for this game.

There will be times that the seemingly endless scavenging will be a little ho-hum, when the frustrations of weird AI will drive you a bit mad, and the initial density of the systems at play seem perplexing. But these are the things of apocalypse survival really, and actually help immersion.

Early on, I thought I was doing so well; established colony, growing its own food and with a successful infirmary and workshop humming along. We had a mod for the kitchen to help generate tasty snacks to help with stamina drops and plenty of beds and mentally stable colonists to use them when tired,

Then I was in a conversation with a newly discovered human colony, discussing the merits of a pile of medications found at their site. Something in the talks went awry and bullets began to fly with two of my levelled-up survivors, well, not surviving the ensuing barney.  Mind you, the battling of two non-zombie AI combatants was reasonably humorous to watch.

This was something that was terribly upsetting and may have induced a game restart in other games, but I soldiered on and rebuilt.

Compared to Dead of Winter, the board game wins in depth and intrigue, particularly with the betrayer mechanic. State of Decay 2, however, does allow for you to invite friends in to co-op play with you, helping on quests, helping to improve the colony and generally being of far better use than the somewhat dodgy CPU driven characters. Co-op play is essential to remove some of the jank that can creep into sessions.

As the game progresses, your survivors will, or should, increase in influence, becoming full fledged citizens and gaining expert skills that will be put to good use as the stakes get higher.

Once abundant supplies will become scarce, and key to survival will be that ability to generate your own needs, establish new outposts, and make friends with other survivor groups.

State of Decay 2 is a deceptively layered experience wrapped up in some engaging game play with a sprinkling of frustration (the amount of times I got a precious car stuck — immovable — on an object…) and some management fun. There is repetition, but there is also exploration and interesting times to be had in the State of Decay 2.

State of Decay 2 is available now on Xbox and PC.

More in this category: « Razer Seiren X Streamer Microphone review: Best mic for streaming? Review: Detroit: Become Human. Is the struggle for identity a game? »
Share News tips for the iTWire Journalists? Your tip will be anonymous