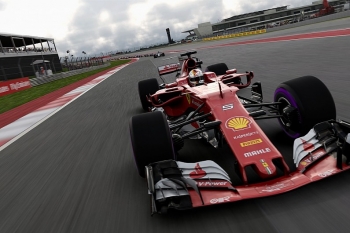 The current season of Formula 1 has seen yet another raft of dramatic rule changes: everything is wider this season, both cars and tyres, as well as a bit heavier.  There are also rules on stockpiling power units and even the livery of driver helmets.

All of these changes have been translated into the latest annualised simulation, F1 2017, the official videogame fame of the FIA Formula One World Championship

This time last year we looked at the game and were thoroughly impressed with what we saw. And for the 2017 iteration, developers Codemasters has managed to step things up a notch.

Not so much in the visuals, but certainly in the gameplay, surrounding career mode and other options on hand for the full Formula One immersion. We really like the career mode in this game, it can be cheezy at times, and it is clear that the portrayal of a F1 aspirant driver means being involved in all aspects of team functions.

As in last year’s release this means checking out the laptop in the team camp getting prepared for the upcoming race weekend. Adjusting race strategies, looking at the state of the current rivalry that apparently you have (usually with your teammate!) as well as looking into what the R&D department might have for you.

This is a marked difference to the previous game, the research and development skill tree rivals that of a complex Role Playing Game (RPG). Like a good RPG however, rather than allowing the player to freely select any research item to improve the performance of the car on race day, the research points required for each upgrade must first be earned.

Like last year, this means spending time on the track, either with familiarisation programmes during the practice sessions, or, in this version of the game, taking part in invitational events that are introduced during the career mode providing unique challenges along the way that spice up what can otherwise be sometimes a little clinical and dry. These events feature classic cars and situations from the past thirty years of F1 history and will provide a dramatic contrast to the driving model of the modern F1 racecar.

Dynamic weather is a treat to witness, our hometown of Melbourne for example is a perfect place to explore the dark clouds that creep over Albert Park mid-race and experience your radio teammate querying whether you felt it might be an idea to come in for Intermediates or Wets to combat the rain that may or may not come. The weather strategy is very important, extremely immersive, and difficult to pull off when you are simply battling to keep the machine on the road, let alone let the pit-crew know that you might pop in for a quick change of tyres.

This expanded career mode is very enjoyable, and the racing equally so. In fact, be successful in one season winning the driver’s championship and you will get to paste the coveted number “1” to the side of your car for the following season.

Out on the race track proper, the modern F1 cars buzz around using a digital simulation that is marginally improved over the already good one in F1 2016. These cars are fun to drive (you can still tweak the “assists” to find the best model for your gaming skill level) with a more stable driving model based on the wider paws of the 2017 F1 rules.

The AI of CPU-driven cars can also be tweaked to a desired challenge level, and Codemasters have many years of AI development under their belt. This means you will get aggressive, yet aware and competent adversaries to go up against. Thankfully they will also have bad luck at times and make the occasional mistake, though representing some of the best drivers in the world, watching a rival spin off the track is rare.

Whilst you should really not try to test this out, collisions remain unrealistic, in our opinion, as it was in F1 2016. It is not really an issue however, as even some of the minor collisions are enough to take out your car, as it should be. This game does have the option of a rewind facility to correct those annoying mistakes if you so wish.

F1 2017 is a great game for experienced or new racers alike. The new Championships mode allow the experience of unique race events with differing rules which expands on the content greatly allowing a significant amount of customisation and replayability in this release.

There are also alternative track layouts to explore and a significant number of classic cars (which can be imported into multiplayer events) to drive and compare across those last three decades of the modern F1 history.

In our opinion F1 2017 is the best game of its kind in the last few years. There is content galore, with options that can be played with, or ignored and left to team management if you wish. This means you can go as deep or shallow as you like and have fun on your own terms.  Developing rivalries, fiddling with pit-strategies and planning R&D spend actually add a significant amount to just going fast on race day, this is an enjoyable, accessible iteration of the F1 virtual arena.

More in this category: « Review: Madden NFL 18 – now that the football season is over Review: Cuphead – 30’s visuals with 80’s difficulty »
Share News tips for the iTWire Journalists? Your tip will be anonymous