The WD_Black SN770 NVMe SSD is a brand new M.2 2280 PCIe Gen4 NVMe SSD for gaming PCs or laptops. What this means is that it’s sleek, lightweight, easy to install, and blazing fast.

Let’s break it down. I'm sure you know SSD is a solid-state drive, already a vast improvement, speed-wise, over spinning platter drives. NVMe takes it to a much higher level using non-volatile memory express - a communications interface and driver that enables SSDs to operate over PCIe instead of SATA, providing increased and efficient performance and interoperability. That’s a lot of words, but the fundamental essence is an NVMe SSD uses the same style of high-speed PCIe slot that you use for your GPU.

It’s a high-speed data transfer mechanism, but if that’s not enough, Western Digital’s drive is a 4th generation unit. Gen3 was already 483% faster than SATA III, and Gen4 drives are a blistering 1,067% faster again.

For completeness, M.2 refers to the form factor, whereby the drive isn’t connected to the motherboard via cable (like SATA) but is directly plugged into the motherboard. This makes sense, being an NVMe drive, so M.2 and NVMe are tightly-linked even though the terms strictly mean different things. The 2280 refers to the dimensions, namely 22mm wide and 80mm long.

So - it’s small, it’s fast, and it’s dead easy to install. You only need a spare PCIe slot on an NVMe-capable motherboard and CPU. It’s worth noting the drive is backwards compatible with Gen3 and Gen2 motherboards meaning you can still get great performance if you have such a motherboard - the maximum your motherboard will provide - and then gain even greater performance as you upgrade your PC.

And sure enough, this was iTWire’s experience. We slotted a WD_Black SN770 1TB model into our motherboard, a Gigabyte Z690 Aurous Pro, and rebooted. Windows detected the drive immediately, we partitioned and formatted it under Computer Management/Disk Management, and then began relocating games to the new drive from within Steam and Epic Games. Mileage will vary, but the drive wrote at 4900MB/s and then testing the relocated titles out read at 5150MB/s. This includes modern games such as Tiny Tina’s Wonderland, full of mirth and expansive mystical lands. The game launched at record speeds saved with barely a flash of the autosave icon and provided a smooth, seamless experience.

The drive is available in 250GB, 500GB, 1TB, and 2TB models with pricing beginning at $95 making it an upgrade that delivers huge price-to-performance value. Besides RAM, an SSD - and especially a modern, ultra-fast, and spacious model like the WD_Black_ SN770 is well worth looking at. It’s backed with a five-year limited warranty. 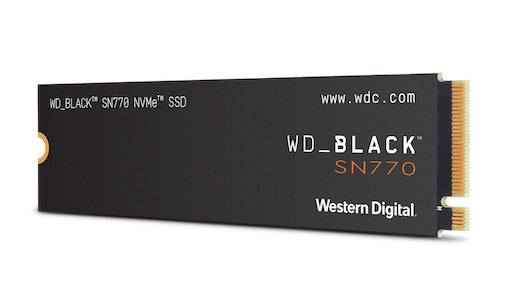 More in this category: « The Poly Studio P21 makes your online calls a cinch, looking good and sounding good See the world and get fit without leaving your home with the NordicTrack S22i studio bike »
Share News tips for the iTWire Journalists? Your tip will be anonymous