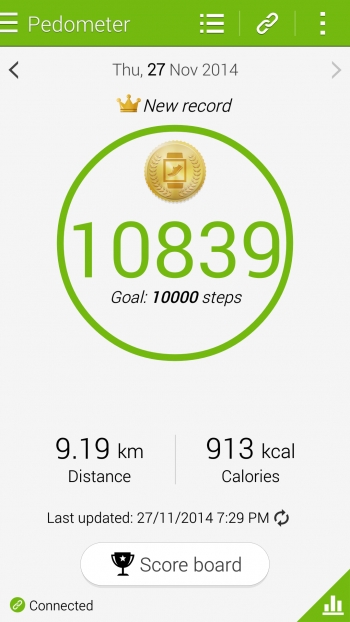 In business we know what gets measured gets improved; apply this principle to your own health and fitness with the Samsung Gear Fit activity tracker.

Make no mistake, the Samsung Gear Fit is a watch and it is smart and it will pair with your mobile phone – albeit Android-only phone – but at heart its purpose is to track your body’s motion.

At the same time, it is sleek and lightweight. Unlike the impending Apple Watch, as well as other smartwatches already on the market, the Samsung Gear Fit doesn’t come with a large display, nor does it run a plethora of apps. I believe this is right. A watch is a fashion accessory and can be petite or chunky, garish or stylish, depending on your unique tastes. An activity tracker, by contrast, should hold fast to your wrist yet feel almost as if it is not there at all. It should be resistant to different weather conditions. It should be almost invisible. And, importantly, it should perform its core functions whether a phone is nearby or not.

This is precisely where the Samsung Gear Fit … well, fits! It is light and small and curved to fit the contours of your wrist. Its Super AMOLED touchscreen presents information in bold and vibrant text. The black band can be swapped out for options in other colours giving a degree of customisation.

I took the Samsung Gear Fit for a spin and I found it comfortable to wear and informative and inspirational.

Unofficially, the clever people at the XDA hacker’s forum have extracted the apk files and report a measure of success in running them on different, non-Samsung, Android devices. I was not successful in making it work on my Google Nexus tablet.

When used in conjunction with a Samsung Galaxy S5 I had no difficulties. The phone paired with the Gear Fit quickly and effortlessly, next proceeding to update its firmware to the newest and best release available.

The Gear Fit works autonomously of the phone, acting as a pedometer, checking your pulse, and other functions. Yet, its value really comes in when combined with the S Health app on the Samsung Galaxy. To be clear, the Gear Fit will not allow you to use any functionality whatsoever until it has been paired with a phone and I am unclear why Samsung made this decision. Without Samsung’s Android phone software the metrics cannot be recorded or used, however you cannot even take a walk or run and see how many steps you took until the phone has been paired.

As such it is not possible to discuss the Samsung Gear Fit without Samsung’s S Health app. However, this app is truly tremendous and it makes Apple’s iOS 8 Health app look positively anaemic.

Let me tell you a little about myself. I am a 42 year old male who has worked professionally in IT my entire working life. I completed University in 1992 and began working full-time December that same year. I’m thus now in my 23rd year in the workforce … 23 years of sitting in chairs all days staring at monitors. My job – and I am not alone by any means – is completely sedentary. As you age, as your parents begin to develop health issues, as you have young children, you put more thought into mortality and also to worrying about your family’s future if the primary breadwinner were not part of it.

Like you, I understand I should be striving for at least 30 minutes of activity every second day or so, that I should be aiming for 10,000 steps per day, and the like. Yet, how many steps a day do you make? How do you know?

The solution to that problem has come in the form of pedometers and this gives an actual figure – which is more information than not having a pedometer. Yet unless you monitor the pedometer constantly through the day you cannot really know what activities are having the biggest impact and if you can optimise your day further.

Check out this image below, from S Health, which in turn is using information pulled from the Samsung Gear Fit. 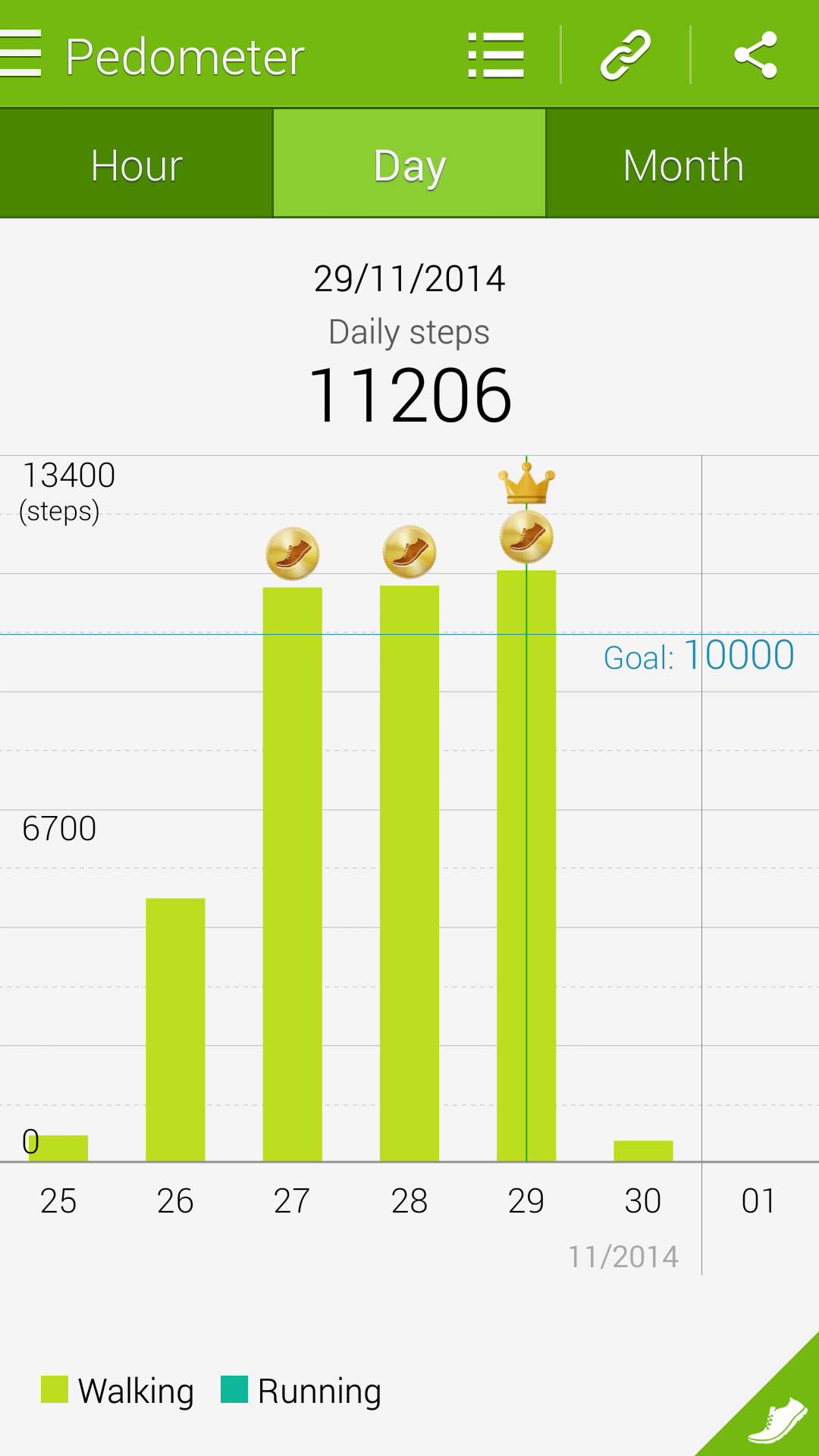 On the 26th November 2014 you can see I took about 4,500 steps. That was an average day, going to the office, coming home, doing my usual routine. I didn’t do anything extra this day to get a baseline result. So, immediately I knew something had to change; my job isn’t doing anything for my health.

Pleasantly, you will see I beat 10,000 steps for the next three days. S Health rewards me with a gold medal each day I beat my goal, and it gives me a crown for the day with the highest achievement. I challenged myself to get that crown every day, performing just that bit more activity every day.

Now, so far, it can be argued, this information is nothing more than a traditional pedometer would give and that’s true.

Yet, the Gear Fit is not only measuring your steps, but when. Please read on to page two ...

Here is how active I was on the 27th November 2014. I took a healthy 2.62km walk, then got ready for work, drove to the office, and was seated by 9am. Around 1pm there is a small bit of activity during lunchtime, then perhaps a toilet break around 3:30pm, then hometime after 5pm. 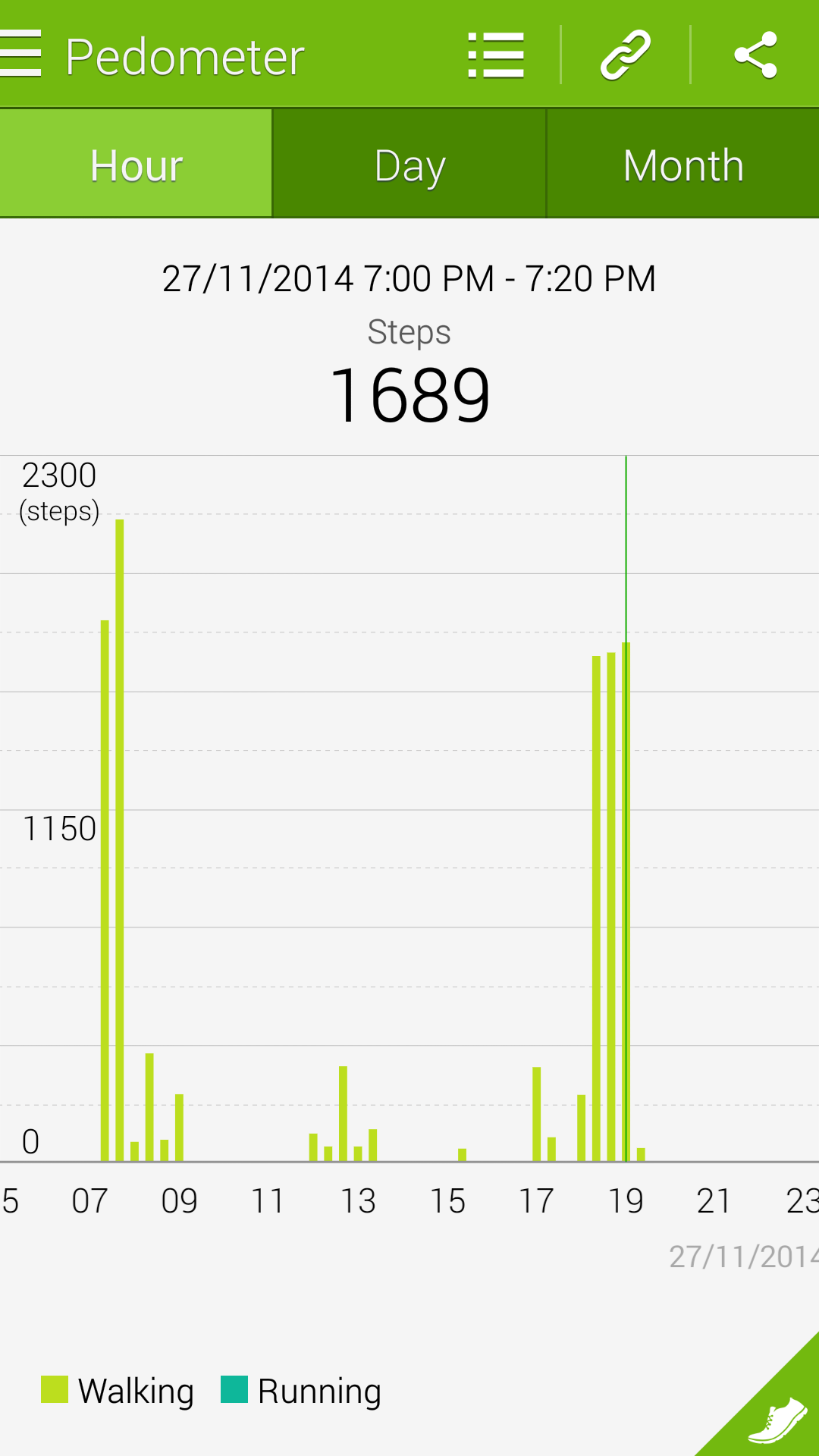 I may as well be comatose, just lying down for that entire 8 hour period from 9-5pm. If this was an ECG the patient would be dead.

I then performed more activity in the afternoon – in fact, if I may confess, my wife suggested Zumba Fitness World Party on the Xbox One, and sure enough that was a lot of fun – even if totally uncoordinated – and it got my steps over the 10,000 line.

First, despite what I had previously believed and understood, 30 minutes of walking in the morning does not take me to 10,000 steps. Make no mistake, any extra activity is terrific. Yet, it is clear the advice to “walk 30 minutes every second day” is just simply not enough. Without measuring this I would have happily continued believing I was doing sufficient exercise based on an oft-repeated and well-intended piece of advice.

Next, the Gear Fit allows me to compare activities. When playing the Zumba game I was accelerating through my daily step count at a far greater pace than when walking. That may sound logical enough, and those two activities may be at opposite extremes. Yet, the principle is there – with the Samsung Gear Fit and S Health you can drill down into your metrics and compare activities to determine which is giving the best result.

This is important; after all, time is a finite resource. That’s my biggest problem too. Out of every resource we have time is one we can never get back. I have work and family commitments, plus many extra-curricular activites. I write, for one thing, I run a user group, I teach, I have projects I want to implement, and so on.

So, how do you optimise your time? I could go for a lengthy walk over a couple of hours and get my steps up, or I could engage in a high intensity game and achieve that same outcome in a smaller amount of time.

Additionally, I can seek to change my habits during the working day. Any office worker knows they’re not doing a lot of activity during the day, and a pedometer confirms this, but seeing it so starkly laid out via S Health really hits home that I need to move more during the day.

For me, it is here where the Samsung Gear Fit really delivers tremendous value. It is a nice enough watch. It notifies you of meetings, calls and messages. These are great features, but for me, it is the measuring and drilling down into what I have done, whether I have achieved my targets, and how I can do things better and smarter, is where the strength lies.

After all, in my day job, I make decisions based on information. I apply metrics. I measure performance of people and of systems. I analyse those results. I perform corrections. It is a truism that what gets measured gets improved, and the Gear Fit provides the information to apply this to my own daily activity and health.

There is much more that can be said about the Samsung Gear Fit. It is a 24/7 wearable device. It will measure your pulse, it will measure how much you move during your sleep, it will provide messages encouraging you to your goals, and more.

I enjoyed using the Samsung Gear Fit so much that my wife asked if she should buy me one for Christmas – my review unit from Samsung coming to the end of its loan period. Here’s where the big downside of Samsung-compatibility came in. If you operate an iPhone or Windows Phone – or a plethora of non-Samsung Android phones – the Gear Fit just is not an option. However, if you have a Samsung Galaxy or Samsung Note phone or tablet you are in business.