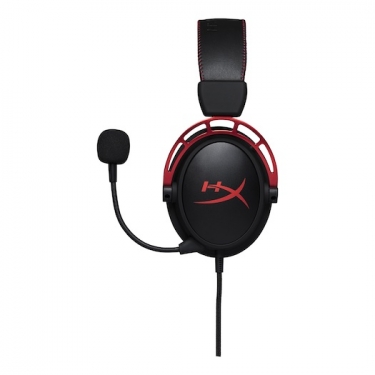 For those not in the know, HyperX is the eSports gaming accessory arm of HP, dedicated to creating the best gaming experiences possible through the comfort, aesthetics, performance, and reliability of its peripherals and accessories. The brand is so strong in the eSports competitive space it even has the exclusive naming rights to the Allied eSports global flagship property in the Luxor Hotel and Casino in Las Vegas - the 30,000 square foot multilevel HyperX eSports Arena.

So, if you're a gamer you can be sure HyperX has your back. It’s a brand by gamers for gamers, and we’re not talking Solitaire here but high-paced, heart-pumping, nerve-clenching, knuckle-blanching gaming sessions. This is especially evident with the HyperX Cloud Alpha gaming headset, first released in 2017 and still going strong.

Earlier this year HyperX announced a new wireless Cloud Alpha headset is coming, with an incredible, unprecedented 300-hour battery life. Yet, the original is no slouch and, in fact, for many there’s a great preference for cabled gear anyway. Just like ethernet can provide a more consistently stable network connection than Wi-Fi, so too a cabled headset is free from concerns of latency and battery life, let alone the wide landscape of devices it can work with.

Provided it has a 3.5mm port, you can plug the HyperX Cloud Alpha into it - this includes PC, PlayStation, Xbox, Mac, mobile devices, Nintendo Switch, VR headsets, and more. There are no adapters required. The box includes two 3.5mm cables - one with a single 3.5mm jack for devices that can handle audio out and microphone in on the line, and a second cable that splits to separate the audio output and input into separate 3.5mm jacks. On the headset end, it’s a single port either way.

What you get with the HyperX Cloud Alpha is a solid performer - it’s a no-fuss gaming headset that’s designed to last the distance. It’s made with a durable aluminium frame, comfortable and soft memory foam, and a strong, tightly stitched and substantial headset band that all combine to give enduring comfort not only for lengthy gaming sessions but for years to come.

HyperX has sold tens of millions of its headsets, which includes the Cloud Alpha. It’s easy to see why HyperX has such success when you look at the Cloud Alpha; it’s a robust, reliable unit that simply works … and works.

iTWire's been using the HyperX Cloud Alpha exclusively for last month. We’ve enjoyed the delightful soundtrack and witty banter of Tiny Tina’s Wonderlands, the headset crisply and clearly alerting us to subtle noises like approaching attackers while boldly rumbling with explosions. There’s a terrific part of the game where you join a bard in his awesome performance before magic missiles fire in an unexpected way. If you know what I’m referring to then you know the rich soundstage and range in this hilarious segment, and playing it through the Cloud Alpha was a real treat.

In fact, I also heard new sound effects in Hearthstone and even began to love emptying the trash on my MacBook too, never before realising the rubbish bounces around on its way out.

What's more, I took Microsoft Teams and Zoom calls (oh, so many calls …) with the headset. During one particularly lengthy call, one of the remote parties switched to his laptop speaker and microphone, removing his headset, because of the discomfort he was experiencing. It stood out to me because my experience was the opposite; I was comfortably enjoying the HyperX memory foam and pliable leatherette. I had volume controls in sight and easy reach on the headphone cable and was able to mute and unmute myself whenever I needed. While the headset is designed for gamers and built to stand up to competitive gaming marathon sessions, the office worker equally benefits from the comfort and build quality.

There's a lot we could say: the headset has a two-year warranty. It includes dual-chamber drivers to provide greater distinction and less distortion with one chamber dedicated to bass and the other for mids and highs. It has a detachable microphone so if you’re definitely not talking you can put it aside. It’s certified for Discord, TeamSpeak, Mumble, and Skype so you know it is guaranteed to provide the best audio experience with those apps and leave you free of the old “can you hear me?” cries.

Yet, words don't do justice. The HyperX Cloud Alpha is a headset you have to experience to feel the solid, long-lasting build and to feel the physical ease and freedom of wearing it. It’s a headset you know will see you through the greatest gaming sessions of your life, both individually and with your friends and teammates.

You can find it at JB Hi-Fi for $159 and at other retailers.

Check out this HyperX video on the Cloud Alpha's dual chambers:

More in this category: « See the world and get fit without leaving your home with the NordicTrack S22i studio bike The Tranya T30 earbuds bring you affordable comfort with bass boosting and gaming low-latency »
Share News tips for the iTWire Journalists? Your tip will be anonymous