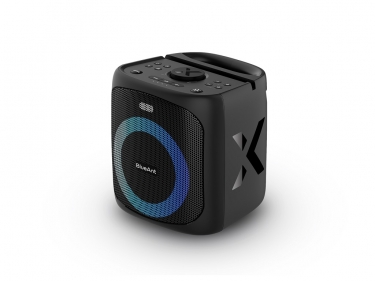 If you're looking for a Christmas gift for the music lover in your life, BlueAnt has released what may well be the best sub-$300 Bluetooth wireless speaker on the market in its X4 model. The unit is surprisingly powerful for its size, with clear, undistorted music and also a bonus microphone for karaoke fans.

BlueAnt is an Australian audio brand well-known for its Bluetooth car kits and portable speakers. Its latest X-series speaker, the BlueAnt X4, came out just in time for Christmas and is a tremendous gift idea for the music or party lover in your life - even if that's yourself.

In fact, Taisen Maddern, BlueAnt chief executive officer, says the X4 is pound-for-pound the best speaker the company has ever created. It weighs 2.6kg, comes in five colours, and not only can you pair it with your phone or laptop or tablet, but you can also connect up to 100 of the X4 speakers to each other for the ultimate in complete surround entertainment for venues from backyard BBQs to huge halls. The speakers can connect within 100 metres of each other - one speaker remains in control of all the volume and the music with the others following seamlessly. No matter where your guests are, they can enjoy the same sound as everybody else.

iTWire tested the BlueAnt X4 out and was stunned by its strong output, pumping out beats without cracks, crackles, distortion, or delays. It is a solid-sounding unit, accompanied by flashy colour cycling options for that extra bit of party bling. The microphone added to the fun, using a standard microphone socket and with microphone volume and echo controls on top of the unit, in addition to music volume controls.

"The X4’s peers can’t rival its clarity, bass and range of audio, regardless of volume,” Maddern said. “It’s the most versatile speaker that’s available today. It can easily be a party speaker, the speaker that sits in the middle of a picnic, it can be a karaoke machine, as a boombox for an outdoor gym, or be comfortable at home or in the garden."

"We looked at what made our X5 speaker such a huge hit with Australians and we added to it in a more portable form factor that can help revellers announce loudly that parties are back in Australia," Maddern said.

The X4 features an IP54 splashproof design, intelligent LED lighting, and BlueAnt's patented psycho-acoustic bass extension and lights that groove with you in time to the music. It includes five different light modes as well as an option for lights-off if you prefer a more subdued atmosphere.

It measures at a tiny cube-like 24cm x 23cm x 26cm making it super-easy to carry anywhere or to sit anywhere you need it. It is the ultimate party in a box. It comes in black, white, teal, pink, and purple colours to make a bright statement in any room.

The BlueAnt X4 has 50Watt power and can play for up to 12 hours on battery at 50% volume. It can play continuously when connected to power. It includes two EQ modes tuned by studio engineers, supports Bluetooth 5.0, and contains a 133mm woofer and 51mm tweeter, along with a bass vent.

You can buy the BlueAnt X4 from BlueAnt online and from select Telstra stores.

Check it out here:

More in this category: « The 1MORE ColorBuds 2 - tiny earbuds, big sound Tranya continues its journey of affordable bluetooth earbuds with the Tranya T20 »
Share News tips for the iTWire Journalists? Your tip will be anonymous