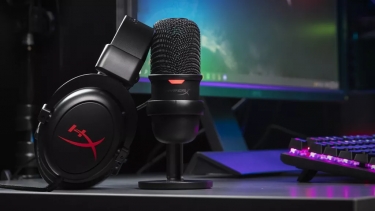 The HyperX streamer starter pack may well be the key to launching your awesome streaming career in 2022, bringing a headset and microphone that build on HyperX’s gaming and engineering expertise.

HyperX announced the release of its streamer starter pack early in December, available for $179 from JB Hi-Fi and elsewhere. iTWire has since had the pleasure of trying the kit out and can say it offers tremendous value for the aspiring streamer in your life.

The kit is essentially a bundle of two HyperX products available separately, but at a reduced price when purchased in the bundle - the HyperX Solocast USB microphone, and the HyperX Cloud Core headset.

The HyperX Solocast USB microphone offers tap-to-mute, a cardioid polar pattern that ensures it picks up sound coming from the front such as your voice, and a flexible and adjustable stand. It has a microphone mount threading so you can attach it to an arm as well as let it sit flat on your desk. It’s a small unit when compared to the microphones you might see on broadcast news, but it’s most certainly effective. iTWire found it provided quality, clear, crisp voice recording even when we had loud sounds playing from the computer behind the microphone, however, we also found we had to speak clearly and closely to it. If we wandered around the room, as you might expect, our voice dropped off. Still, that’s what you want - a microphone fixed on what’s right in front of it, to ensure the best voice recording as you speak and commentate.

The HyperX Cloud Core headset is comfortable with a durable aluminium frame, memory foam and premium leatherette ear cushions. Importantly, it brings clear audio to you with its 53mm drivers and DTS Headphone:X spatial audio capabilities. These provide you with a clear aural advantage in games, knowing precisely which direction your enemies are coming from.

The headset also includes a detachable and flexible boom microphone which you can attach if you wish to use it, or simply remove because you’re using the Solocast microphone instead.

The Solocast microphone is a USB-C device with an included USB-A to USB-C cable. The Cloud Core headset has a single 3.5” cable with volume up/down and mute controls. The headset cable has a single 3.5” endpoint that handles both input and output. If your computer supports both from a single port you can plug it in there, or if you don’t intend to use the headset microphone you can plug it into the headset socket. Alternatively, the pack includes a splitter adapter which you plug the headset cable into, leading to separate audio input and output cables so you can connect these to your computer’s microphone and headset sockets independently. Thus, no matter what sockets your computer has - or even your 3.5” socketed smartphone or tablet - you can make it work.

Plug-and-play doesn’t come any easier, and no special software is needed to make the devices work. Your computer recognises them instantly. The pack includes a two-year software license for DTS spatial audio; without this, the headphones still work perfectly fine, of course, but you lose the software-driven spatial features.

The pack comes with a two-year warranty and is a great start for anybody with streaming ambitions. Simply combine it with the free Twitch Studio software or OBS project software and away you go. There’s nothing more to buy, and with great sound, your viewers will hang on to your every word.

More in this category: « The Jabra Evolve2 65 headset that keeps you productive and comfortable, all day, wherever you are Step up your personal security now with the YubiKey Bio which replaces your password with your fingerprint »
Share News tips for the iTWire Journalists? Your tip will be anonymous