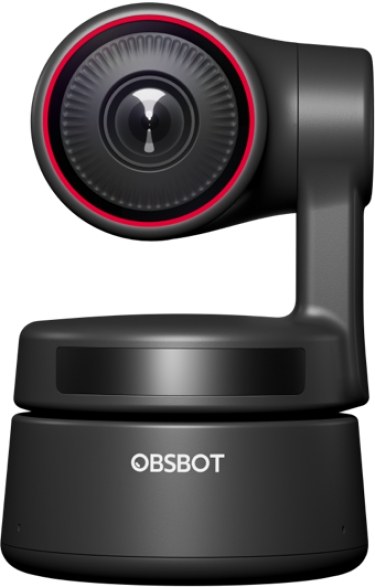 There are webcams and there are webcams, but the Obsbot Tiny 4K is a webcam like no other. Despite its diminutive size, it packs a 4K camera with a two-axis gimbal along with AI smarts.

First of all, the Obsbot Tiny 4K is a webcam - it sits atop your monitor or laptop panel, or anywhere else you wish to clamp it - and it captures crisp smooth video at 3840x2160 4K 30fps resolution, as well as a range of other resolutions.

Plug it into power, and plug it into your computer via USB, and away you go. Wherever you would use a camera so too you can use the Obsbot Tiny 4K. It shows up in Zoom, Teams, your photo apps, and everything else exactly as you’d expect, providing colourful, sharp imagery. To provide you certainty, there’s also a privacy mode where you can be sure the camera isn’t able to record you.

Yet, being a great webcam only scratches the surface of what the Obsbot Tiny 4K does.

The camera includes a two-axis gimbal with a controllable range of pan +/- 150 degrees, and tilt +/- 45 degrees, moving at a maximum of 120 degrees per second.

As you might figure, the camera can move around, and you can control it. Download the free Obsbot TinyCam app for Windows or macOS to manage the device, moving the camera around via an on-screen joystick.

That's pretty nifty by itself; you can spin the camera and zoom in and out to show various objects or others in the room.

Yet, you don't need to do that. It's also an AI-powered webcam that has all the smarts to handle tracking, auto framing, and gesture control.

That's right; out-of-the-box the camera will intelligently adjust the lens in real-time to keep you in focus no matter how you move around, and you can use specific hand gestures to make the camera re-orient its focus and zoom in on you.

By default, the gesture-based zoom is 2x, but you can adjust this in the app.

iTWire tried it out and found the Obsbot Tiny 4K novel, clever, and even fun to use and show off. It works immediately as it should out of the box but may take you several tries to master the gestures and understand how it operates. You can see my first attempts here, and I got better with practice.

Here are some tips to help you.

I later found it didn't matter if I was using a virtual background - because, of course, the camera sees the real scene, even if I present something different to those I am conferencing with.

I also found the camera's microphones picked my voice up with clarity and worked in conjunction with the camera’s smarts to focus on who was speaking and from where in the room.

It's a smart, clever camera and despite doing so much it’s really light and really portable. In fact, it ships with a padded protective carry case so you can take it around with you. It’s the camera you can set up on your desk, or bring on the road to have a makeshift conference call anywhere.

I've even found a great use case - if I’m at my desk I can sit the camera on top of my external monitors, but if I decide to work on the lounge with the laptop on my lap, the built-in laptop camera is pointing up at my face showing off my flabby neck. With a small bit of setup I can instead position the Obsbot Tiny 4K at a higher position nearby - because it can sit stably on its dock without having to clip onto anything - and present a better face. Even better, turn HDR on for better visuals in low light or direct sunlight alike.

The Obsbot Tiny 4K is a webcam you need to check out and see to believe. You can read the user manual here, and check out Obsbot’s official video here too. It is available on Amazon now.

More in this category: « The Alogic DX3 universal docking station brings power and vision to your working day Always look your best on any video call with these portable lighting options from Hypop »
Share News tips for the iTWire Journalists? Your tip will be anonymous