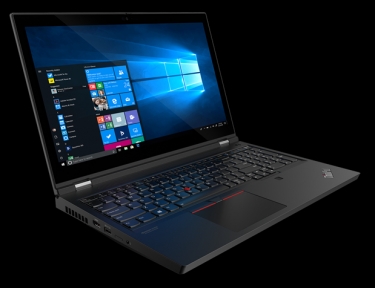 Boasting an Intel i9 and Nvidia RTX 4000, the Lenovo P15 is an absolute beast!

With a maximum battery life of around 13 hours - we simply booted to Windows and turned off all power saving and a minimum life of 1 hour, the Lenovo P15 has some serious grunt (more grunt than a truck-load of pigs, as a colleague used to say). A typical re-charge from the provided power pack took around 1 hour.

Let's start with a quick feature list of the review machine. We'll discuss options in the specification list at the end.

It also comes with an acceptable array of connectivity ports, nothing special here.

As with most recent laptops, the unit comes with a small shade to stop the bad dudes watching you when you least expect it, although the handle is somewhat difficult to see. In addition, it comes with Dolby Atmos sound, although we weren't as impressed with this as we might have hoped to be.

With nothing big enough in the iTWire castle, we also borrowed Lenovo's ThinkVision T32p-20 4k monitor to give the laptop some work to do. This is a bright, very sharp unit - highly recommended. This is available at a variety of on-line stores for around AU$1,000.

Sitting firmly in the 'workstation' category, this thing has some solid build quality… and weighs as much as one might expect. However, given the intentions, this is quite reasonable, especially since it contains a massive cooling system to support the i9 and the RTX 4000.

To simplify manufacture (and potential upgrades), the graphics card is constructed as a daughter board that connects to the mainboards. Many other similar laptops have a customised board that incorporates both main and graphics.

Thinkpads have a reputation for quality keyboards and this unit is no exception. We have seen reports that the keys have a tendency to gather grease, but in the limited time we had the unit, and the fact that we weren't the first reviewers to use this particular laptop, we didn't notice anything out of the ordinary. Your mileage may vary, as they say.

We immediately added a mouse to the machine as we are no fans of touchpads or trackpoints. We consider them to be for emergency use only! The few times they were used, they seemed to function OK, although we were generally required to use the buttons as tapping on the touchpad (to make a left or right click) didn't seem reliable - but that may just have been us!

There is also a fingerprint reader, but it wasn't tested. We assume it works fine - Synaptics readers on other laptops we've owned or used have worked well.

The camera is as good as can be expected for one with a total length of around 5mm! We felt it was equivalent to those in many other laptops - neither noticeably better, nor noticeably worse.

As mentioned at the beginning, the battery will last around 13 hours doing absolutely nothing, while 6 hours is a reasonable expectation for 'typical' work (perhaps a spreadsheet or two, a presentation, simple graphics editing, etc.). You're closer to three hours once you start some video conferencing and if you are performing some heavy video editing, programming etc… you'll get even less. With this in mind, the average user is more likely to run permanently attached to the wall; relying on the battery to keep things alive for short presentations and for moving between locations.

Because we have an avid gamer in the house, this person's eyes lit up when they saw the machine and installed every game they could think of, along with lots of graphical benchmarks - he was impressed! A few of the benchmark reports are included here, but broadly it ranks high up in the echelons of portable gaming rigs. 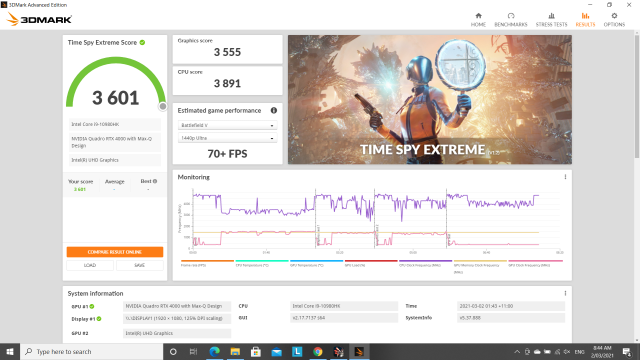 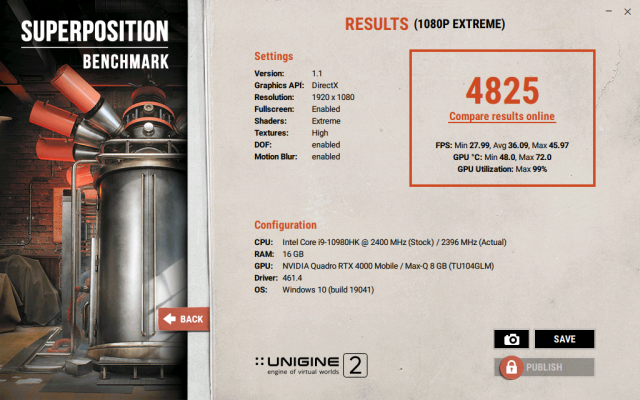 During the 3D Mark benchmarking, the CPU spent much of its time at 100 deg C while the GPU peaked at around 72 deg C. During this time, the fans were running LOUD and the air coming out was rather warm. We wouldn't recommend it being on your lap!

All for the princely RRP of $7,749. Online retailers are offering lower prices, but you'd have to use their configurators to build a matching unit to be sure of the actual price. 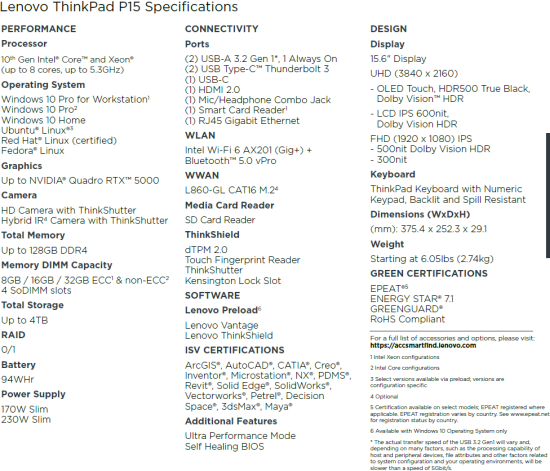 More in this category: « The Poly Calisto 5300 Bluetooth speaker gives a mobile conference room, anywhere, anytime The Withings Sleep Analyser is your data-driven key to better rest, health, and mood »
Share News tips for the iTWire Journalists? Your tip will be anonymous